This week our story time theme was Pretend to kind of go along with Halloween.  Sometimes I will embrace a holiday and plan a story time around it, other times I will pick a theme that kind of goes with aspects of the holiday (i.e. pretend or dress up for Halloween, gifts or toys for Christmas etc.).

So, our letter of the day was P for Pretend.  This was little harder of a concept.  For the letter of the day I have been printing of a very large letter and putting it up with a picture that goes with our theme (like a big A and a picture of an Apple).  Most weeks, they can get the letter and the word easily with the picture.  Today many of them knew the letter 'P,' but we got to have a little chat about what it means to pretend.  They liked this part because they got to tell me what they were pretending to be today (I had told them all to come in costume). 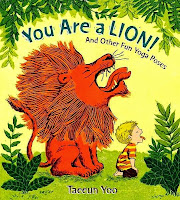 The first book that we read was You're a lion: and other fun yoga poses by Taeeun Yoo.  This books was a LOT of fun for the kids.  It goes through different animal yoga poses.  The poses are simple enough for all of the toddlers to do (and for me to do whilst holding a book).  I really like that the directions for the pose are given on one page and then you turn the page to find out what animal you are.  This allowed the kids to guess what they thought it was and then yell out the answer when they saw the pictures.  Then, when appropriate, we made the animal sounds.  This was a super fun book that would be great for any animal, pretend, yoga, exercise, movement etc. theme. 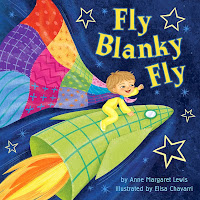 Our second book was Anne Margaret Lewis' Fly blanky fly.  In this story a little boy pretends his blanky is all sorts of things, such a a rocket, camel, whale, airplane, and snake.  For this book I passed out our scarves and told the kids to pretend that the scarves were their blankies.  During the story they used the scarves to do the motions of the blanky swooping, wooshing, marching, etc. 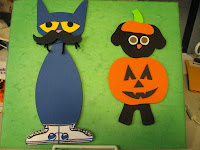 The last story that we did was a flannel board that I made for Halloween based on Pete the Cat: I love my white shoes by Eric Litwin.  In my story Pete goes out to trick or treat and meets some 'scary' charaters.  But, he is not scared as he knows that they are just other cats dressing up in costume.  But, what happens when he comes across a pumpkin dog?  You can read the full story here.

To go with the Halloween side of the theme this week we did my favorite monster songs.  First was Laurie Berkner's Monster boogie where the monsters boogie and wiggle around the room.

We also sang The Learning Groove's We are monsters where the monsters stomp, clap, shake, and roar around the room.

Since Halloween is a few days away and we all have candy on the brain we ended story time with a little parade though the library and a very quick trick or treat where the kids got to pick one piece of candy and a pouch of fruit snacks.

Our craft this week was a simple mask.  The kids got a white card stock mask that they could decorate with feathers, markers, and foamie stickers.  Then, they could tape the mask onto a jumbo craft stick to hold it up to their face.

In addition to the craft we had a few activities.  I did a Halloween party for a family program last week and my son (who my mom brings to my toddler time) really wanted to do the games.  So, we had a few games added to our play portion of toddler time. 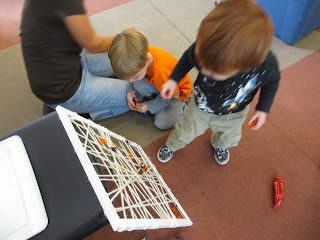 Spider ring toss: I wrapped white yarn around an empty picture frame.  The kid threw spider rings at the web and tried to get them to stick. 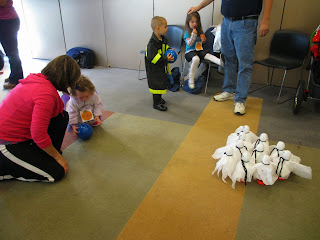 Ghost bowling: I added white tissue paper to our bowling set to make the pins ghosts. 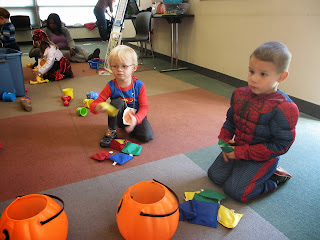 Pumpkin bean bag toss: We happened to have three of these plastic pumpkins so we tried to throw the bean bags into them.

I also set up a Spider Web Walking game that I found via Pinterest from the notimeforflashcards blog.  You can click on the link to see how the original poster set her game up.  Mine was a little simpler, there was a web and I taped spiders at various spots.  The kids were supposed to walk along the web and hop over the spiders when they got to them.  Although, a few kids used the bean bags and tried to toss the bean bags onto the spiders, so that game was fun too!

So, if you have read this blog in the past you may know that I have a little bit of an obsession with Pete the Cat.  I have made both a Christmas and Valentines version of Pete the Cat stories.  Now, I have a Halloween version.  This story is much like the original Pete the Cat: I love my white shoes by Eric Litwin.  In this story, Pete is off for a night of trick-or-treat fun.


It was Halloween night so Pete the cat put on his grooviest costume and headed out for trick-or-treat.  As he walked he sang to himself: 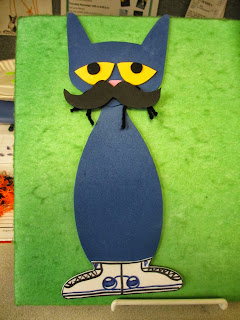 When all of a sudden,from out from the shadows jumped a scary witch! 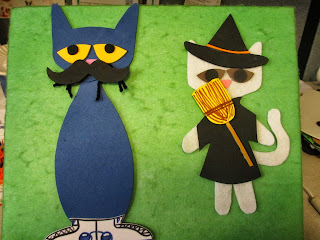 Was Pete scared?  Goodness no!  That witch is just a cat you know.  So Pete kept walking. 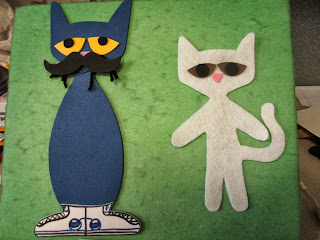 All of a sudden, from out from the shadows jumped a frightening monster! 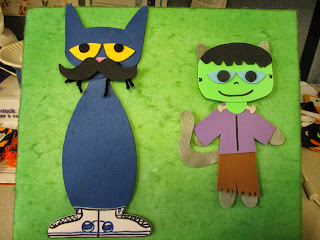 Was Pete scared?  Goodness no!  That monster is just a cat you know.  So Pete kept walking. 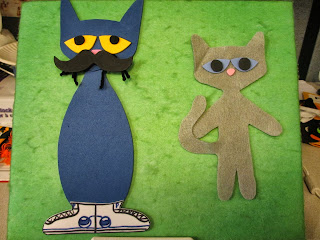 All of a sudden, from out from the shadows jumped a creepy mummy! 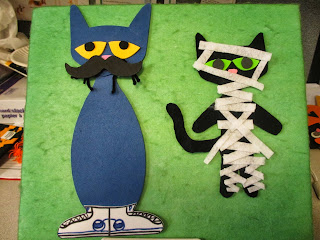 Was Pete scared?  Goodness no!  That mummy is just a cat you know.  So Pete kept walking. 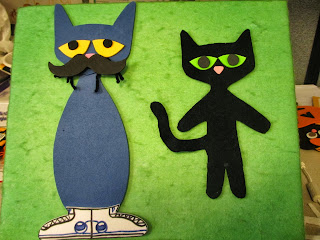 
All of a sudden, from out of the shadows jumped a chilling ghost! 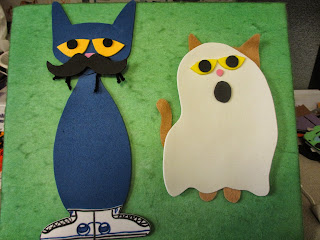 Was Pete scared?  Goodness no!  That ghost is just a cat you know.  So Pete kept walking. 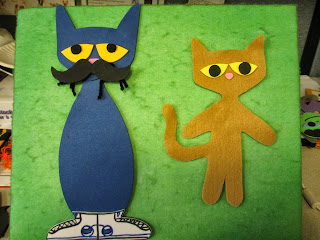 
All of a sudden, from out of the shadows jumped a pumpkin dog! 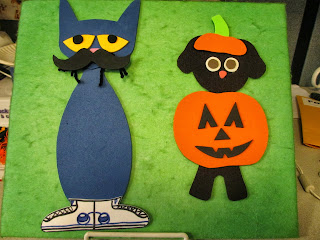 Was Pete scared?  Well… maybe a little.  But, Pete, he knew just what to do.  He looked at that dog and he said:  BOOOOOO  and Happy Halloween!

You can find the rest of this week's round-up with Katie at storytime katie.  Check out the blog for all things Flannel Friday or stop by the Pinterest boards for all Flannel Friday submissions.
Posted by Sarah at 7:11 PM 7 comments:

I have fallen WAY behind on getting some of my story times posted.  I guess that is what happens when life gets busy!

Anyway, a week ago our story time theme was the Zoo and we had a lot of fun with it.  We featured the letter Z for Zoo.  I have started putting a picture with my letter of the day to help clue them in on the sound and start making the association between letters, sounds, words, and reading.  My crowd has been rather young, so when we reveal our letter of the day I get lots of random letters.  At least they are giving me letters and not numbers. 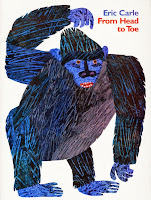 The first book that we read was Eric Carle's From head to toe.  This is a great book for the toddler crowd as it can be very interactive.  Each page gives an animal and a movement that they can do (i.e. the elephant stamps his foot) so the kids can do that move too.  It also has repetition which is great for early literacy. 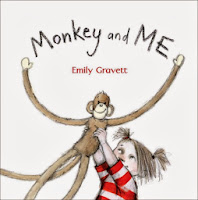 Our second book was Monkey and me by Emily Gravett.  They way this book reads I really thought that I could sing it, but I was unable to come up with a tune that worked well.  (Let me know if you come up with one!)  Instead I did the book as a chant.  I would say a phrase and the kids and parents would repeat it.  This added one extra sentence to each page (the book has you say 'monkey and me' three times) but it worked out really well.  Then, every other page features the animals that the little girl and her monkey saw at the zoo.  Since the kids were already in 'chant mode' most of them went ahead and yelled out the animal - which is exactly what I wanted them to do. 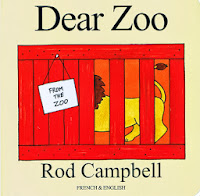 Our flannel board was the ever popular Dear Zoo by Rod Campbell.  The actual book is a lift the flap book which is fun and the flaps are big enough to work in story time.  However, we already had a version that someone had made into a flannel board.  I actually had made one at my previous job but had to leave it behind.  You can see mine here.

We sang Sue Schnitzer's All the fish, which features lots of animals.  They are more of the pond than zoo variety, but lots of zoos have pond animals, right?

For Raffi's Going to the zoo we got out the scarves.  I had all of the kids wave them around as Raffi sang about Mama taking us to the zoo tomorrow and then we did the animal motions in between. 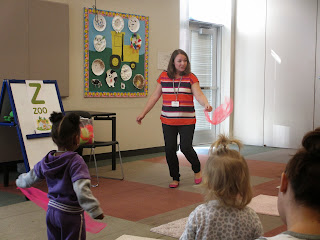 We have been ending every story time with Carole Peterson's B-Bananas.  The kids really seem to enjoy the repetition and the chant is fun to do.

We had 2 crafts to pick from, though many of the kids end up just playing with the toys.  For the crafters we had the outline of a letter Z and they could tear paper and glue it inside for stripes on a zebra.  There was also some yarn that they could add on as a mane. 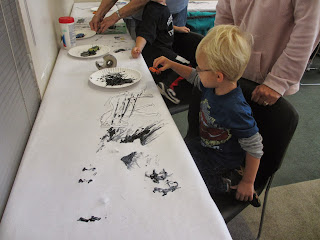 The second craft we used cars to drive black paint lines onto a blank zebra to add stripes.  The kids really enjoyed this craft.  I had the zebras pre-cut and they could add the stripes then mount it to a piece of green paper.
Posted by Sarah at 4:32 PM No comments: