In a Vegetable Garden

So, last week our theme was Cookies and this week we featured Vegetables - talk about a let down.  When trying to introduce the theme I asked the kids what they thought the opposite of cookies is.  Responses were things like cake, cereal, and milk...hmmmm...maybe we need to do a story time about opposites?  Our letter of the day was V (here many replied A, which is understandable) and they had some trouble coming up with words for V.  Luckily, Sparky helped them out with the words Van (because most of them probably arrived in one) and Vegetables. 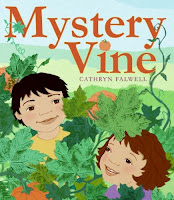 The first book that we read was Mystery vine : a pumpkin surprise  by Cathryn Falwell.  This is a good vegetable book.  It shows a family that plants a vegetable garden in this spring and as they are taking care of it they discover a mystery vine.  As they care for the other vegetable plants they watch the vine wondering what it will be.  Then, in the fall, surprise!  The vine has pumpkins.  I thought this was great for a vegetable theme and then I visited the pumpkin farm and discovered that pumpkins are really a fruit.  (Make sense, who wants vegetables in a dessert pie?)  So, we all go to learn something new at story time.

Our second book was from the NYPL list and was Ruth Krauss's The carrot seed.  This is a nice short story for the 2 and 3s about a little boy who plants a carrot seed.  Everyone tells him that nothing will happen with the seed, but he takes care of it anyway by pulling weeds and watering it.  We even had the big book format, so that made Crockett Johnson's simple illustrations easy to see.

The last story we did was a flannel board of Vladimir Vagin's The Enormous Carrot.  In my telling a bunny is trying to get a carrot out of the ground but it just won't come out.  He asks friends to help him pull it out and even with several of them it won't come out.  Then a mouse wants to help and the other animals tell him that he is too small.  But, the little mouse wants to try anyway and guess what happens?  My co-worker did this story a week ago and had the kids pretend to pull, that went over very well with my groups.  I found a version of the story here, but I varied it some.

I did find some more vegetable songs this time around.  We sang Laurie Berkner's Valley of the vegetables.  I passed out bells to ring as we sang and I printed off pictures of the different vegetables that we 'eat' in the song.  I'm not sure how much they really liked the song, but they did enjoy ringing the bells.

We also sang In our garden by Peter and Ellen Allard.  This is a slower song, but you can do the actions of digging, planting, watering, picking, and eating.  I have seen songs like this that are done acapella but I liked that this one gave us some background music.

Our final song was another Laurie Berkner, this time we sang I feel so crazy I jump in the soup.  I mentioned that soup is often made with vegetables and then we jumped, swam, galloped, splashed, and sat in our soup.  This is a fun song and it is short, which is good for the little kids.

I had planned for a vegetable craft so we made pumpkins with tissue paper.  Then I learned that pumpkins are a fruit, but oh well, they are still fun to make and seasonally appropriate! 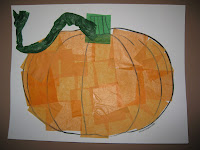