Week five of our summer reading program highlighted Super Heroes.  Since it is always fun to come to work in costume, I dressed up as a generic super hero.  (Alas, I took no pictures.)  The costume made it really easy for the kids to guess the theme, so I also had them name some of the super heroes that they knew of.  The list was rather short.  I even had to point out a few that were on their t-shirts.

We had been opening story time with the song 'If you're happy and you know it,' but, given our theme, we sang 'If you're super and you know it.'  I left all the other words the same to save on confusion, though every time we sang the word super we flexed our muscles. 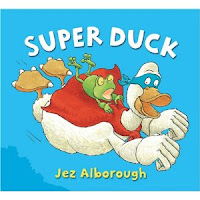 The first book that we read was Jez Alborough's Super Duck.  This is a cute story about a duck who is playing super hero.  Several times during the story he cries 'Make way for Super Duck!'  Goat is trying to get his kite to fly so Super Duck comes to trouble shoot the problem.  Things go a little haywire when they string the kite to the back of a truck and Frog ends up soaring away.  But, luckily, Super Duck is there to save the day. 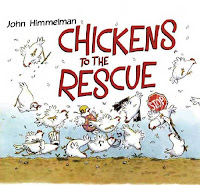 Our second book did not really have super heroes per se, but Chickens to the rescue by John Himmelman has chickens stepping up to save the day.  Each day of the week something goes wrong on the farm, but, have no fear 'Chickens to the rescue!'  I love taking a chicken picture and holding it up for the kids to say 'Chickens to the rescue' along with me.  This time I even found a super hero-ish chicken and taped it to a bright yellow burst (think the old Batman t.v. show).  We practice shouting a few times before reading the book, then they can even tell me the title.  This book is always lots of fun. 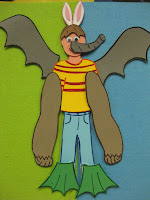 Because books and flannels featuring super heroes were hard to come by for 2-5 year olds, I wrote my own flannel story.  You can read the full description here, but the gist of the story is a little boy devises his own super hero costume that ensures he will be the BEST super hero ever.  He gets all of the necessary abilities, but the end result is a little bit odd.

We did manage a few super hero songs.  In addition to 'If you're super and you know it' we sang 'Mask, cape, belt and boots' to the tune of 'Head, shoulders, knees, and toes.'  It went: 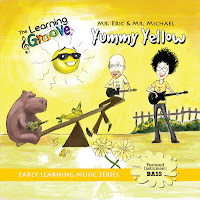 Recently I discovered that Eric Litwin (author of Pete the Cat books) also has cds!  One of his songs is called the Super Silly Tango, so we used this song.  The kids do various motions to tango music.  This first part is step, and step, and turn around.  The motions are pretty easy to follow and the music is fun.  Mr. Litwin has several albums - one for each color I think- so more of his music will probably be making its way into my future story times. 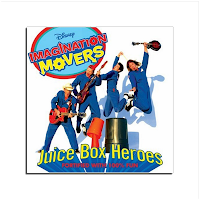 We also used the song Shakable you by the Imagination Movers.  This is a very fast paced song that I like to use with shaker eggs.  My favorite part is the ending when you shake and jump.  We hold the shakers high in the air and jump up and down. 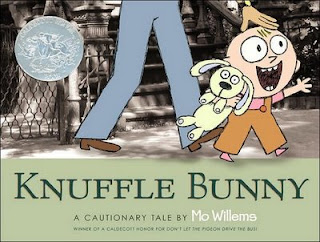 Our video for the week was Knuffle Bunny by Mo Willems.  Not much super hero tye-in here, but the story is great and I love this animated adaptation.  The kids really seemed to enjoy this video (so did the parents as they could relate to the story as much as the kids could!)