The Royals at Bedtime

This week the secret title of my story time was 'Royal Pains at Bedtime' but that didn't sound very nice (it is just amusing for those of us with kids).  So, for my story time friends our theme was Bedtime for Prince and Princess.  We featured the letter B for Bedtime for Prince and Princess since we had already used P during Penguin week.  After planning for this theme I realized that I should have saved it since the Summer Reading Program has a night time theme this year, but oh well.  I was really amused how many kids told me that they go right to bed and stay there all night.  I could hear all of the parents muttering about how their child was lying :) 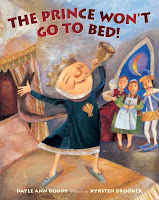 The first book that we read was The prince won't go to bed by Dayle Ann Dodds.  This book is a little longer than I usually read for the 2's and 3's.  I ended up skipping a few pages because the story worked without them.  It was great for my Family Time group that is more of a 4 and 5 crowd.  This is the story of a prince that just will not go to bed.  They try a bath, pudding, extra mattresses, fluffier pillows, a lullaby, but nothing works.  Luckily, his sister is there to realize they were forgetting one specific thing from his routine.  I really like the rhyme and repetition of this book and there is a phrase 'Wah, wah, wah, I will not go to bed!' that the prince repeats a lot.  I had all of the kids do this part, but I made them first promise that they will not repeat it to their parents at bedtime. 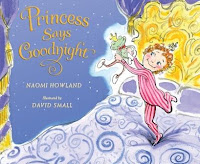 Our second book was Naomi Howland's Princess say goodnight.  This is a sweet bedtime story about how a princess gets ready for bed.  She does many of the things typical children do, like take a bath, have a snack, brush her hair, have a lullaby, etc. just in a much fancier manner.  This was good for talking with the kids about bedtime routine and what they do to get ready for bed.  This book also had great rhyme along with fanciful illustrations. 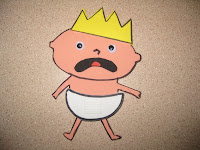 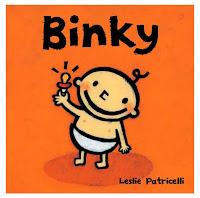 The final story was a flannel board that I adapted from Leslie Patricelli's board book Binky.  I love Leslie Patricelli's board books.  They are a favorite at my house.  The bold, simple illustrations are great for toddlers and her subject matter, style, and language are so easy for the little ones to relate to.  Binky is about a baby who is looking all over for his binky only to discover that it is in his bed, right where it belongs.  Since many of my story time friends are past the binky stage, we had him looking for a teddy instead and I gave him a crown and called him a prince.  You can read more about the flannel board here.

Since lullaby songs are not very exciting to use for story time, I instead used songs that had napping and resting.  We sang Laurie Berkner's We are the dinosaurs since the dinosaurs march, eat, rest, and roar.  We also sang Berkner's version of the Goldfish because the goldfish take lots of naps in between swimming, showering, brushing teeth, and biking.

I threw in Carole Peterson's I like my hat just for fun.  I needed a song to use with our scarves and I figured a hat and crown are similar, not that it really had to go with the theme. 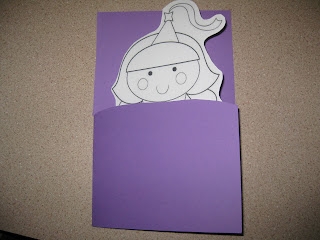 Our craft this week was a pop-up Prince or Princess.  I gave each kid a royal purple card cut to look like a bed.  They accordion folded a strip of card stock and used that to attach the prince or princess inside of the bed.  Then, when the covers are lifted the little royal pops out of bed.  The kids had crayons and stickers to decorate the royals and their beds with. 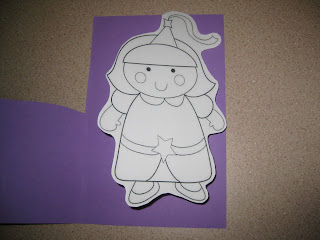 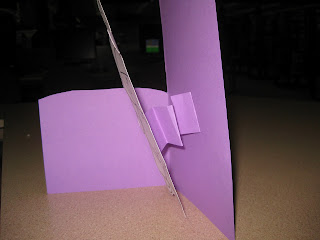