Last week's story time was a LOT of fun.  I aim for fun every week, but last week seemed more so.  It probably helped that there was a little more activity, so all of those wiggly little boys were more engaged.  Plus, our theme was Go, go, go, featuring the letter G along with planes, trains, and automobiles and there was a song that involved screaming.  So, not only were those wiggly little boys more engaged, they were excited to see what was coming next!

Our format was a little different, which made me nervous, but ended up working out well.  Generally, my story time format is as follows:
Hello songs (we do one a capella and one with the ipod)
Sparky introduces the letter of the day and our theme
Read book 1
Song on the ipod
Open shut them fingerplay
Read book 2
Song on ipod using scarves, shakers, etc.
Open the book fingerplay
Flannel board story
Song on the ipod
Explain craft
Goodbye song

This format tends to work really well for me, but last week I found a really great idea that worked better if I switched the flannel story and Book 2.  It worked out well because the second book was rather interactive, but I will get to that in a minute. 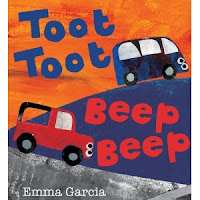 The first book that we read was Toot, toot, beep, beep by Emma Garcia.  This is the second of her books that I have used this session and they are great for story time.  The illustrations are big, bold, and bright and the text is simple and involves making fun noises.  This book features a variety of cars making noise as they drive through the city.  On each page I would tell the kids what kind of car it was and they would tell me what color the car was. 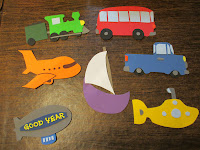 The flannel story that I did was a twist on Bill Martin's Brown bear, brown bear, what do you see?  I found the idea at ValleyStorytime.  I simply made a variety of transportation modes from craft foam.  I used clip art to get the shapes as my vehicular drawing skills are rather lacking.  Then, I would put one at a time up and the kids would tell me what it was as well as what color it was.  Then, say it was the red bus, we would say 'red bus, red bus, what do you see?'  I would take down the bus and put up something else.  I ended with a yellow race car (it got left out of the picture) so that to end the story I could say 'I see a yellow race car speeding past me!'  Then I drove the race car away behind the story time cart so that everyone would know that the story was over.  You can see more pictures at my post here. 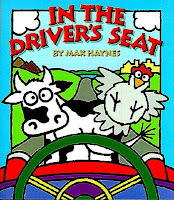 Our last book was In the driver's seat by Max Haynes.  I found this great idea over at Storytiming and knew it was too fun to pass up.  I made up some steering wheels using paper plates and a steering wheel coloring page.  I used the coloring page so that the kids could color it as part of their craft.  As we read  the book they 'drove' with their steering wheels.  I added a few more actions that went along with the book, such as bouncing up and down over mountain roads, plugging our noses as we plunged into a lake, swimming out of the lake, etc.  The kids really enjoyed this and loved that they got to keep the steering wheel.


Before reading the last book we sang one of my favorite songs.  Several years ago I saw a post on PUBYAC with the song:
Row, row, row your boat
Gently down the stream.
If you see an alligator,
Don't forget to scream!

(Not sure who to give credit to here, I have seen it many times since.  If you know I can add that in.)

We sing this once to learn the words and practice screaming in case we see any alligators.  Then, as we sing I pull various puppets out and scream like crazy at each one that is not an alligator.  The kids all laugh and correct me (though by the 2nd or 3rd round they are screaming right along with me at the monkey puppet).  They would probably do this for the entire half hour of story time, but after about 6 random animal puppets I bring out the alligator.  I do not scream as he climbs up on top of my head.  Then, I sit calmly as the kids go nuts pointing to the alligator on my head.  After a minute I look up and scream, then the alligator whispers in my ear that he is really friendly and just wants to read a story with us, so, of course, we let him.

We also sang To stop the train by Peter and Ellen Allard.  This is a song that repeats the same few lines and gets faster and faster.  It has a good 'train' sound so we cycle our arms like the wheels of a train and go faster and faster along with the music.  We also pull on a cord and say 'toot-toot.'  (**I should note that this song gets stuck in my head every time I think about it.  It kept me from sleeping one night last week!  I guess it is just that catchy!**)

Scott Besaw has a version of the Wheels on the bus that is fun.  I gave all of the kids scarves for this one that we hold as we do the motions.  This has the typical motions like the doors, driver, wipers, babies, but also includes the muffler so all of the kids get to stick out their tongues and make a pfffttt sound which is always fun.

I put Ralph Covert's Driving in my car right after reading In the driver's seat.  This way all of the kids had steering wheels to use as we sang about driving our cars all the way to Minneapolis.  This song is a little long, so we did the verses that has a car horn, windshield wipers, and a muffler (more pfffttt sounds) and then we stopped the song. 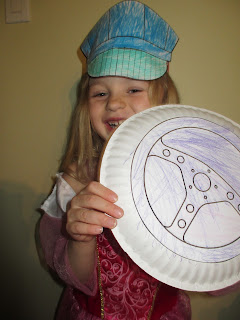 Our craft, in addition to coloring the steering wheels, was a train conductors hat.  I found the craft here at Danielle's Place.  The kids colored it and then (with parental help) assembled it with glue sticks and double sided tape.  I was worried they might be a little challenging for the parents, but most had no trouble and they turned out great!

I must add, that the story ideas mentioned were both posted to Flannel Friday, there are so many great ideas posted there!  Check out the Pinterest page by clicking the Flannel Friday button to the right if you are not familiar with Flannel Friday!

Email ThisBlogThis!Share to TwitterShare to FacebookShare to Pinterest
Labels: 2's and 3's, transportation