Commotion in the Ocean

To kick of storytimes this summer we read books about the ocean. This fit right in with the 'Make a Splash!' summer reading theme. We read books that featured a variety of ocean creatures as I planned for a week of 'Fish' and 'Sharks' for later in the summer. 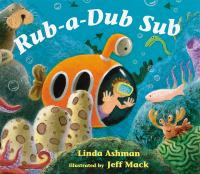 The first book that we read was Rub-a-dub Sub by Linda Ashman. This is the story of a little boy who goes for an ocean adventure in his submarine. He glides past all sorts of sea creatures until he finds a Shark! The simple text and bright illustrations in this book are great for reading to a young crowd. 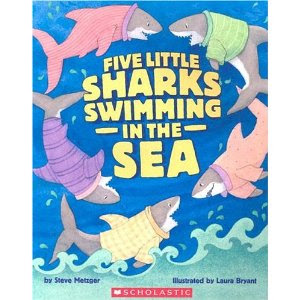 Our second book was Five little sharks swimming in the sea by Steve Metzger. This story features a family of sharks who disappear one by one as they explore the ocean. After each disappearance 'mamma calls the doctor' and those poor sharks are banned from one sharky activity after another. While this isn't the most thrilling tale, it has nice repetition and is great for counting. Plus, what kid doesn't like sharks? 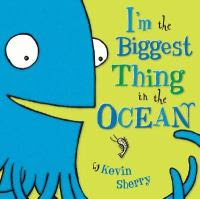 The final story that we read was I'm the biggest thing in the ocean by Kevin Sherry. I love this story. It features a giant squid who is so proud to be bigger than all of the other sea creatures that he knows. But, as he brags about how big he is, he soon finds out that there might be something bigger out there. This book is quite fun and even gets a few chuckles from the parents.

As part of the program, we sang 'The Creatures in the Ocean.' It goes to the tune of the wheels on the bus. I have seen many variations of this song in many places. The great part about it is that you can do as many or few animals as you have time (or interest) for.

We also danced to 'Fish Dance' from Johnette Downing's album Music Time. Each of the children were given a scarf that they could wave around as we danced to the music.

Our ending song was 'All the Fish' from Sue Schnitzer's album Wiggle and whirl, clap and nap. I love this song about all of the different animals slpashing around in the pond. It is very easy for the younger kids to participate with the motions.

Sine with summer programs we never know how many kids are going to show up (and in the past we would have over 30 kids in a program) we decided that we would end with activities instead of crafts. The two activities that we featured for the ocean were a parachute and a fishing game. With the parachute we started by making waves, small and then bigger and bigger (though most of the kids only did bigger). Then we tossed in some sea creatures (finger puppets) and bounced them out, made them fly as high as we could, etc. The fishing activity was a few poles with magnets at the end of some fishing line that the kids used to 'catch' some paper fish (each one had a paper clip on it to attract the magnet). The fish were swimming in a small plastic pool. The kids enjoyed this, but we had to be careful as the lines got easily tangled.

Most of the program was kept the same for the 4 and 5 year old age group, we just changed the books and some of the songs (Clamshell Clap from Johnette Downing's Fins and Grins and The Goldfish from Laurie Berkner's Victor Vito were used) . Here are the books that we used: 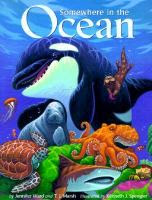 The first book that the 4's and 5's heard was Somewhere in the Ocean by Jennifer Ward. This is an ocean counting tale that depicts different sea creature parents and their babies while discussing what they do in the ocean. Each creature has one more baby than the last as you work from one to ten. 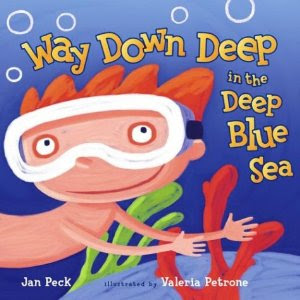 Our second story was Way Down Deep in the Deep Blue Sea by Jan Peck. This story features a little boy who goes snorkeling through the ocean and encounters many different sea creatures. The illustrations are really vivid and large, perfect for the story time crowd.

The last story we did was a flannel board adaptation of The Deep Blue Sea by Audrey Wood. This is a cumulative tale about all the things you can find on the red rock in the middle of the deep blue sea. You repeat all the items as you add a new one, so this is a great story for audience participation.

Our final summer storytime for the 4 and 5 year old crowd was all about sharks. I didn't want to scare them too much (just in case there were a few beach vacations planned) so we worked our way from kind of scary sharks to friendly 'smiley' sharks. 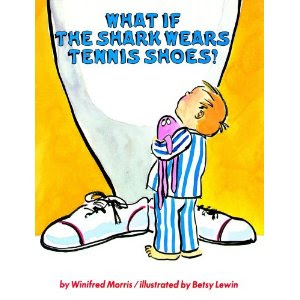 The first book we read was What if the shark wears tennis shoes? by Winifred Morris. This book features a very inquisitive little boy who is rather concerned that a shark is going to come and eat him. His mother tried to reassure him, but he persists informing her that 'you don't know everything.' I really love what happens when the shark does show up to eat him! 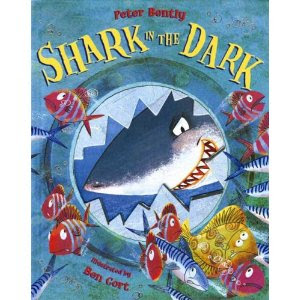 Our second shark book was Shark in the Dark by Peter Bently. In this story the poor little fishes are getting fed up with the big mean shark in the dark. They have to band together to see if they can teach that shark a lesson he will never forget. 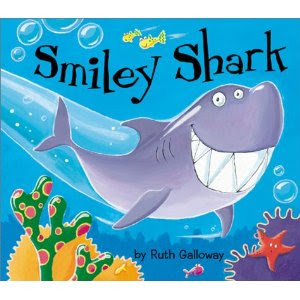 Finally we read Smiley Shark by Ruth Galloway. This made a nice pleasant ending for our shark books as Smiley Shark is just a friendly shark with a bad reputation. None of the fish want to play with him as they are all scared of those big, white teeth. But, Smiley Shark finds that those sharp teeth can be useful.

While the shark books were easy to come by, the shark songs were a little more fleeting. We did the rhyme 5 little Fishies:

5 little fishies swimming in the sea, Teasing Mr. Shark you can't catch me. Along came Mr. Shark as quiet as can be, And SNAPPED a fish right out of the sea!

Another song we did was The Goldfish by Laurie Berkner. There aren't any sharks in this song, but it has fish and is fun to sing.

Thankfully, I had one child inform me that sharks don't eat people, so no worries there!

We ended with Tooty Ta by Dr. Jean and then the kids all made a shark craft. I adapted this from an alliagator craft we'd done before where you fold a piece of cardstock length wise and cut-out a shark shape so that the folded edge does not get cut. The kids cut teeth for the shark and then glue on felt scraps in various shades of grey and ivory. Since the cardstock was folded, the shark stands up on his 'feet.' (I guess if you really wanted to you could give him some tennis shoes!)
Posted by Sarah at 4:31 PM No comments:

This year's summer reading program was 'Make a Splash, Read!' I fully embraced this theme and planned storytimes that were everything water related. I'll post some of the ones from earlier in the summer later, but for now I'll post the last week, a fishing theme (as we were getting a bit sick of all the fish). This story time was for the 2 and 3 year olds (4 and 5 year olds got Shark stories, I'll post them next).

Especially for the little ones I try to let them get up and move between stories and then calm down before the book. It tends to work well, though we still get the occasional 'runner.' Hello and Goodbye songs don't change during each session. Other songs and rhymes do, though we often repeat many of the same rhymes and fingerplays week to week.

As every other week we started with our 'hello' songs:

Hello, hello, hello how are you?
I'm fine, I'm fine.
I hope that you are too!

And Wake up toes, by Joanie Bartels from her Morning Magic album. 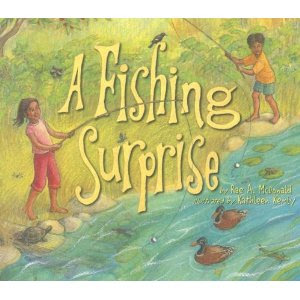 Then we read the book A Fishing Surprise by Rae McDonald. This is a cute book about some children who go fishing to catch some fish for dinner but come back with something else instead. The illustrations are a bit fall like, but the story isn't and the kids don't seem to care. 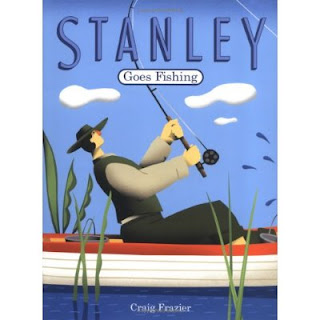 The second book we read was Stanley goes fishing by Craig Frazier. Stanley sets off on a fishing trip and ends up finding the fish in an unexpected place. I really like the ending to this story and the simple text and bright illustrations were great for the younger kids. 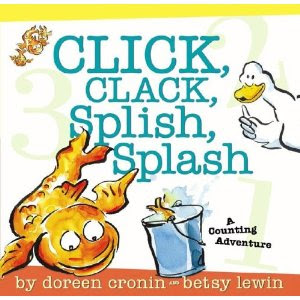 Our final book for the day was Click, clack, splish, splash: a counting adventure by Doreen Cronin. Doreen Cronin's books are usually a hit and this one was no exception. The barn animals are up to something once again. They leave a note that says 'gone fishing,' but their definition of fishing doesn't quite match up with the farmer's. This book is also great for a little audience participation as you can count the fish - you know, just in case duck missed a few!

Songs in between the books were:
Goldie Rock by Debbie Clement (they each had a shaker egg to play along)
Row, row, row your boat by the Old Town School of Folk Music

We ended with Tooty Ta by Dr. Jean (always a crowd pleaser) and our 'Goodbye' song:

The craft for the day was a fishing pole. It was fairly simple. I gave each kid a straw, a piece of yarn, a paperclip, and a cardstock cut out of a fish. Before hand I punched a small hole near the fishes mouth as well as punched a hole through the straw and tied one end of the yarn. Then I placed lots of stickers and crayons on the table and let the kids sticker and color the fish before 'hooking' it with the paperclip which thier cargiver tied to the other end of the yarn.
Posted by Sarah at 3:54 PM No comments: