Sing a song in Story Time

This past week our story time theme was books that you can sing.  This theme is always fun because there are a lot of great books that can be sung.  And, you tend to get lots of audience participation when you pick songs that are well known by your toddler crowd. 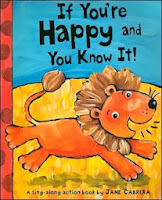 The first book that was sang was If you're happy and you know it by Jane Cabrera.  This is a fun one since the kids know the song but it adds lots of extra motions like flapping your wings, nodding your head, or turning around that get the kids up and moving.  And, Jane's illustrations are always nice and bright making them easily visible for story time. 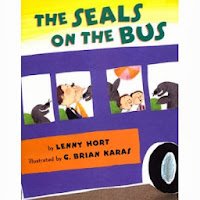 Our second sung book was Lenny Hort's The Seals on the bus.  This is another familiar tune with the toddler crowd, so many of them sang along.  Though, in Hort's version there are many animals on the bus who make different noises.  To get the kids more involved I would ask them if they knew which animal was on the bus and what sound they made.  And, I really like the ending of this book when the skunks get on the bus... 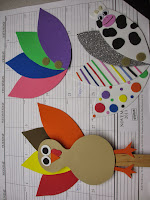 This was our last story time for the fall session and though Thanksgiving is most of the month away I thought we could throw in the Turkey song.  I actually did this one last year, but that was at a different library and even still it is a fun one.  You can read about how I made the turkey here and watch the video to get the song lyrics.  The song is about colors of the turkey feathers, so it is good for the little kids.  I did modify it this time around and put the turkey on a paint stirrer stick.  I used velcro to stick the turkey on the front and added another piece of velcro to the back to put the feathers on.  This made changing the feathers easier since I did not need to pull the turkey all the way off of the flannel board to add new feathers.

We sang Carole Peterson's version of the song Shoo Fly.  In this one there are animal actions in between each verse so the kids are up and acting like alligators, birds, etc.  I have also done this in the past with scarves that the kids wave around to 'shoo' the fly.

We got out our shaker eggs for another Carole Peterson song and did the Shaker Hop.  This is a fun song to the tune of the Bunny Hop where the kids are putting the shakers in and out and then hopping around.

It was Carole Peterson day as we threw in the song Tommy Thumb is up.  This is a great finger play song that I use quite a bit to transition from a movement activity to a book.  It is kind of like Where is thumbkin, but you only use the thumb, pointer, pinkie, and then all of the fingers (skipping the 'bad' one and the hard one!)  And we ended with her song B-Bananas.  We have done this song every week of the session at the end of story time and the kids have really enjoyed it. 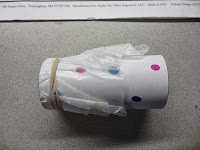 Our craft was a kazoo.  This was a very simple one.  Each kid got a toilet paper roll and a piece of white paper that was cut to fit around the roll.  They decorated the paper with markers and paint stampers then taped it to the roll.  Then, they used a rubber band to cover one end of the roll with wax paper.  When they sang or talked into the roll it made a funny sound. 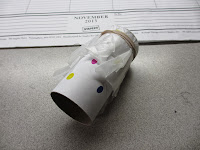