Flannel Friday: An Ode to Flannel 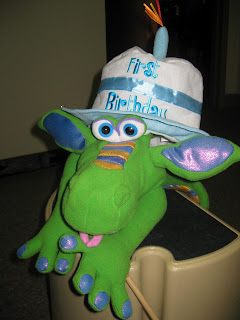 Oh Flannel Friday, how I love you so!
Fridays were so boring, but not any more.

I had thought flannel was just for clothes,
but I see how well in stories it goes.

Each and every Friday morn,
Flannel ideas are being born!

Story time's no longer boring.
Kids and parents are not snoring.

I read on Friday with such glee,
Great story time possibilities!

And all the bloggers, oh so wise,
Have moved story time standards up so high!

Sorry for the cheesy poem, but I felt that if this was truly an 'ode' I needed to actually write one :)  In honor of Flannel Friday turning 2 we have been asked to talk about what Flannel Friday means to us, has benefitted our work, etc.
First off, I will tell you about how I came to Flannel Friday.  I guess it was bout 2 years ago that I ran across a few blogs run by children's librarians.  Ironically, I found them while looking for flannel story ideas to use with my toddler story times.  One of the blogs I found was Miss Mary Liberry, and I just loved her ideas and voice so much that I returned frequently.  I began noticing posts for Flannel Friday so I did some blog hopping and discovered some really wonderful ideas being shared by some wonderfully creative people.  I was hooked.
It took me a little while to finally join in, but when I did I was warmly welcomed to the Flannel world.  Everyone is very encouraging and helpful providing not only a great community but also an amazing story time resource.  Many times I have found a great idea that sparked an entire story time plan.  I now make sure that anyone I meet who works with young children hears about the wonderful thing that is Flannel Friday.
Flannel Friday has encouraged me to work to make story time as exciting and innovative as I can.  Even though many times posts are ideas that have been used before there are new twists that help make them current or more interesting than before.
For anyone who is working with young children the Flannel Friday blog and Pinterest page are amazing resources.  I truly applaud the work of all those pinners who have made the pinboards so navigable. 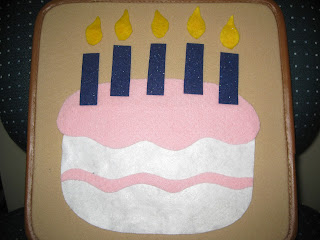 So this week Flannel Friday is gearing up for Summer with a special Summer Reading theme - for those of us who use it the theme this year is Dig into Reading.  For the rest of you, lots of worms and dirt this week!

I have a semi-triple post, one rhyme done two ways and a craft possibility.  The first one is a tube-prop story that I first saw used at Mel's Desk with her 5 Green and Speckled Frogs.  Of course, instead of frogs I've got worms (any Dumb and Dumber fans out there?) 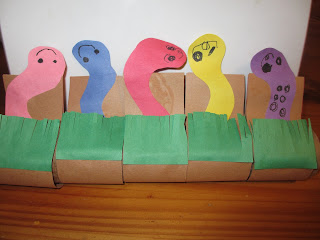 I modified the song One elephant went out to play and it goes:

1 little worm went out to play
On a very rainy day.
Splashing in puddles was so much fun
That he called for another little worm to come:
HEEYYYYY WORMYYYYY!!!!!

Repeat until there are 5 worms:

5 little worms went out to play
On a very rainy day.
But then out came the big bright sun
And the 5 little worms had to end their fun.

Then, if you want to send your worms back down into the ground instead of lying bloated in puddles:

5 little worms came out to play
On a very sunny day.
As the bright sun shone all around,
1 little worm squirmed underground.

I took a paper towel roll and cut 5 strips of paper, each 2 inches wide and as tall as a piece of construction paper when turned to a landscape position.  I added grass to one side: 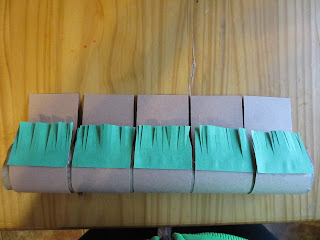 Then I cut worms.  I folded the paper in half before cutting my worms so  that I got 2 of each color.  That way they could hang off of the end a little but be the same shape.  I then gave them to my craft expert to decorate: 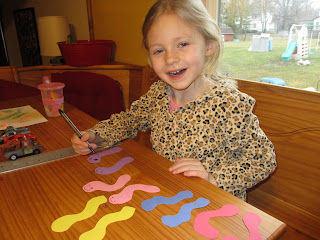 That is when I realized, this would be a rather simple, fun craft.  If you pre-cut the paper strips kids could really do most of the rest.  I love crafts that can be played with or used to tell a story or rhyme that we used during story time.  At any rate, my assistant had fun. 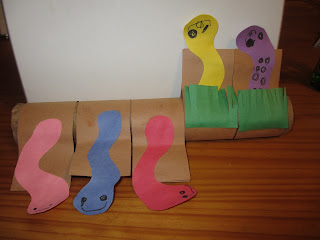 To go with the same song or rhymes, I wanted to make a board where the worms could slide up and down. So, I got a foam core board  and cut it to the size that I wanted.  Then, I drew vertical lines every three inches (this was determined by the size of my board and the fact that I wanted 5 slits).  I also drew 2 horizontal lines, each 3 inches in from the edge.  The horizontal lines were to know where to begin and end my slits. 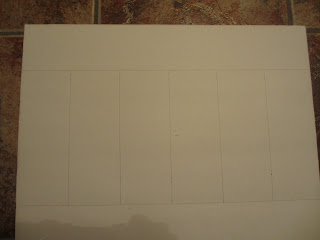 I then used an exacto knife and a ruler to cut my slits.  I had to make 2 passes with the knife to cut through the board.  Thankfully, we have some lovely tile floors in our house that were unaffected by my knife.  I kept the ruler in place for the second pass to ensure a clean, straight cut. 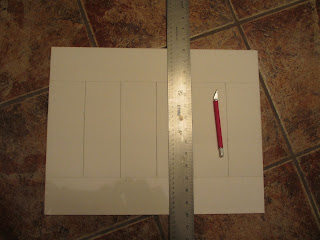 Next, I adhered the flannel to the foam board with an adhesive spray.  I chose a stiff flannel sheet to add a little stiffness to the whole board.  Luckily the craft store put the foam board in a really big bag that I could use to protect the floor.  The spray worked great and made a nice flat bond. 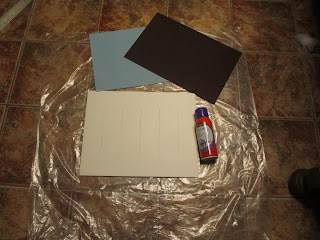 Once the adhesive dried I pushed the knife through the slits so that they went through the flannel as well.

Next i made some worms.  They are rather plain right now, I will probably jazz them up some, but I was looking to get the construction down first.  I attached a brad to a small piece of foam that matched each worm and then glued it to the back of the worm so that the head of the brad was sandwiched between the pieces of foam. 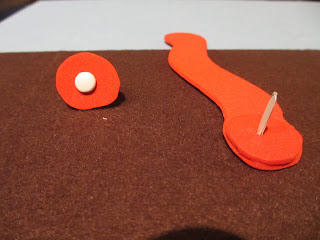 The narrow part of the brad fits nicely into the slits of the board.  I had hoped to glue the flat ends of another brad to the one attached to the worm to give a little more of a handle, but that did not work out.  I was trying to super glue them together, but merely ended up with white paint super glued to my finger. 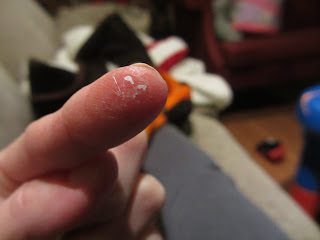 Regardless, the worms slide up and down on the board, there is just less of a handle to hold.  Hopefully I will find a fix for that, I am thinking maybe I can hot glue the brad to a popsicle stick or something. 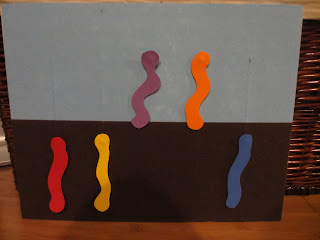 I would also like to add some grass across the middle so that there is not such a harsh dirt/sky.  My plan for that is to use extra foam core to lift a strip about an inch or so across the middle.

You can find the complete round-up this week with Lisa at Libraryland.  All things Flannel Friday are located at the Flannel Friday blog and the Pinterest page has a great visual display of all posts sorted by theme.
Posted by Sarah at 12:55 PM 4 comments: