Green are the Veggies

Week 5 for storytime featured the letter V for Vegetables!  And who loves GREEN vegetables?  We do, or at least many of the children claimed to.  (We made vegetable prints for the craft and apparently many of the kids wanted to EAT them not paint with them!)  So we talked about things that are green, other than just vegetables and spotted a few kids who even wore green to storytime.  Then we talked about all of the green vegetables that we love to eat.

Our first veggie themed story was Come into my garden by Cynthia Rothman.  This book features all of the many vegetables that you might grow in a garden, even brussel sprouts, and notes that you can even stay and find lunch!  We had this story in Big Book format, so the pictures were nice and large for all the kids to see.  The story is short, which is good for this crowd, and can lead to a little discussion of other things that you might find in a garden. 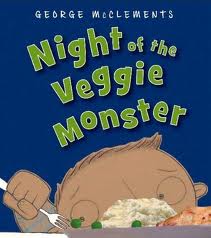 The second veggie story was one of my favorites, Night of the veggie monster by George McClements.  Subjected to eat peas every Tuesday night, a little boys turns into a 'veggie monster' the second that the pea touches his lips.  Toes are curling, things are quivering, and then, the unthinkable happens, he accidentally swallows the pea only to find that it really isn't so bad.  Parents tend to get a kick out of this story, especially those who know what a veggie monster really looks like. 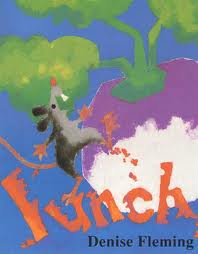 Our final book was another story that I tweaked.  I adapted the book Lunch by Denise Fleming into a flannel board to tell the story about a mouse who woke up hungry.  He crept into the kitchen where he found an array of vegetables.  Since we were focusing on colors, I tried to make a vegetable for every color.  But, first mouse had to put on his pink 'bib' and grab his blue fork (the two colors for which no veggie could be associated).  After eating his way through the rainbow, mouse was tired, so he went back into his hole to nap until lunch time.  This was a good participation story as the kids could tell me what the veggie was and what color it was.

Songs about vegetables seem to be scarce.  So instead we sang a song about gardening and the steps that it takes to grow the vegetables.  It went to the tune of The Wheels on the Bus:


Then you take the can and you water all around...
Watch as the plants come popping up...
Pick the veggies and eat them up...

Then to go along with the green theme, we sang Five green and speckled frogs:

Five green and speckled frogs,
Sitting on a speckled log,
Eating some most delicious bugs.
YUM YUM!
One jumped into the pool,
Where it was nice and cool,
Now there are four speckled frogs.
RIBBIT RIBBIT!

I have a magnet board with the frogs on a log and they jump into the pool as we sing.  Sometimes we'll stop and count the frogs between verses to keep the kids' attention or kill some time.  I guess we could have had the frogs eating some vegetables, but what frog wants to do that?

And wouldn't you know it, Laurie Berkner actually sang a song about vegetables.  The Valley of the Vegetables on her Buzz Buzz album.  I wouldn't say it was the most exciting song ever, but we shook our shaker eggs around as Laurie sang about vegetables.

We ended with Dr. Jean Feldman's Tooty Ta, which has no reference at all to vegetables, but is generally fun to do.  Although this time I got the feeling that I was doing this one alone.  The kids that were joining me were having a blast while the others looked on wondering what the heck I was doing.  If you have never heard it, it is like the Father Abraham song where you keep adding actions until every part of your body is moving.

As mentioned earlier, our craft was vegetable prints.  I set out trays of green and yellow paint along with cute up broccoli, green peppers, celery, and cucumber (the green veggies).  The kids dipped the veggies into the paint and made prints of the paper.  Some of them came out looking really interesting and of course the kids enjoyed the paint.  (We provide smocks - adult size small t shirts - for such craft days.)
Posted by Sarah at 1:46 PM No comments:

Who doesn't love dinosaurs?  That is why week 4 of storytime was all about Dinosaurs.  Our letter of the day was D for dinosaur and our color of the day was blue.  The kids knew lots of words that start with the letter D, like Daddy, dog, dragon, and of course dinosaur.  They also knew some things that were blue, many of them were wearing it.  There was also a lot of excitement when I asked who had blue eyes, apparently it was a lot of them!  (Sorry to all the brown-eyed kids we forgot week 1!) 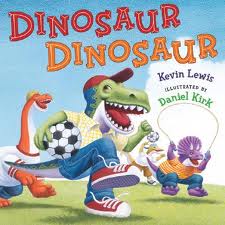 Our first book was Dinosaur Dinosaur by Daniel Kirk.  I like this story because the dinosaur behaves just like a toddler or preschooler would.  He wakes up grumpy, loses a shoe in his messy room, throws a fit when playtime is over, I love books that both the kids and parents can relate to!  The rhyming text flows well and the illustrations are also nice and bright in this book. 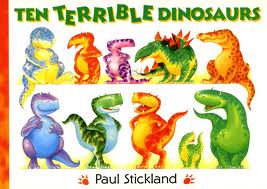 The second dinosaur book we read was Ten Terrible Dinosaurs by Paul Stickland.  Stickland has written several dinosaur books that are great for the toddler / preschool group.  This story starts with 10 dinosaurs, but they begin to drop off as they play too rough or need to go home for a nap.  The last sleepy little dinosaur is woken from his nap by a 'roaring surprise' that catches the audience off guard as well.  The illustrations are mostly the dinosaurs, so they are easy for the kids to see. 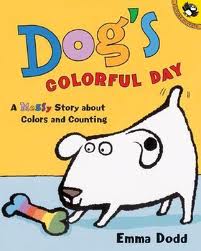 Our final story was one that I modified to fit our dinosaur theme.  I took the book Dog's Colorful Day by Emma Dodd and changed dog to Dino.  I created the story as a flannel board to share with the kids.  Dino starts the day with one black spot, but as the day goes on he accumulates a variety of different colored spots.  By the end of the day he is a colorful mess!

While dinosaur books were plentiful, dinosaur songs that I liked were harder to come by.  But, I did find this song on another storytime blog here and we modified it slightly to have dinosaur names that I could confidently pronounce!

Not that is has a dino theme, but we sang the song Flitter Flutter by Johnette Downing and danced our scarves around to the music.  This song has a nice tune for fluttering the scarves around.

Our final song was We are the Dinosaurs by Laurie Berkner.  This is a favorite of mine as it has lots of action at the little dinosaurs march, eat thier food, take a nap, and end with a nice loud surprising ROOOAAARRR!!!

The craft we did was just ok in my opinion, but the kids really seemed to enjoy the process.  I try not to repeat crafts too often, so we made dino puppets out of white paper bags.  The kids had 2 green cricles (outside of the eyes), 2 white circles (inside of the eyes), 2 green paper strips (arms), 2 white triangles (teeth), and a red paper strip (tongue).  They assmebled the dino puppet and the part they really enjoyed came in when the used large circle stampers to decorate the dino.  The kids loved the stamping action and didn't seem to care the the dinosaur was a strange dinosaur/lizard/snake/alligator combination!