One for the Birds

Week 3 of winter featured the nursery rhyme Two Little Blackbirds along with stories about Birds and the letter B.  This was a great nursery rhyme to feature since it has the fingerplay to go along with it.  Somehow I kept pulling owl books for this one, but I managed to keep the owls to just one book and the craft. 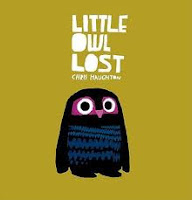 So, our first bird book was Little Owl Lost by Chris Haughton.  This is a really cute story about a little owl who can't find his mother and a somewhat crazy rabbit who doesn't quite seem to know what an owl really looks like.  The illustrations are muted and simple, great for storytime sharing and this book is fun to read because the rabbit tends to be rather excitable. 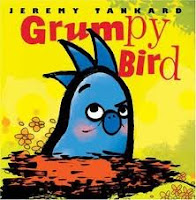 Our second book was Grumpy Bird by Jeremy Tankard.  Bird woke up so grumpy that he did not even want to fly so he had to walk past all of his friends who's many questions only made him grumpier.  But, as good friends do, they kept at him until he was no longer grumpy.  The illustrations for this story are bold and bright so that grumpy bird and his friends are easily visible. 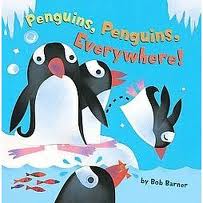 The final story featured penguins of all kinds in Bob Barner's Penguins, Penguins, Everywhere!  Penguins go about their day doing things like eating, playing, staying warms in cute, cartoony pictures.  The really simple text makes this a great last book since it is short and has eye catching illustrations.


Since our storytime was featuring Two Little Blackbirds, we did the fingerplay:
Two little blackbirds sitting on a hill,
One named Jack and the other named Jill.
Fly away Jack and fly away Jill.
Come back Jack and come back Jill.
If you have never done this fingerplay before, you simply use your pointer fingers as each bird.  Wiggle each one to indicate which they are then hide them behind your back when they fly away and bring them back again.  This is really simple for the children to mimic even if they do not know the words.

I was really excited to find the song Two Little Dickey Birds / Roly Poly on the Teach a Toddler: playful songs for learning cd by Priscilla Hegner and Rose Grasselli.  This way we could do the fingerplay again with music and it wasn't too repetitive.

We also sang the song Flitter Flutter by Johnette Downing that features birds flying in the air.  We used the scarves with this and did flapping motions with our arms.

Our final song was Sue Schnitzer's All this Fish.  The kids just really love this song, so it seems to be one of my go to songs when I don't have something that really fits the theme.  However, there are seagulls in this song, so it did work out!

The craft was a simple owl made with cut tissue paper glued to an owl outline.  I also gave orange paper for a beak and construction paper for the tree branch.