W is for Winter Story Time

I live in a place where there is no escaping winter.  A few weeks ago we were having record cold temperatures with wind chills below 30.  And, after a little warm up, it looks like the mercury is going to plunge again.  The best way to embrace this weather is with a story time - in a warm room of course. 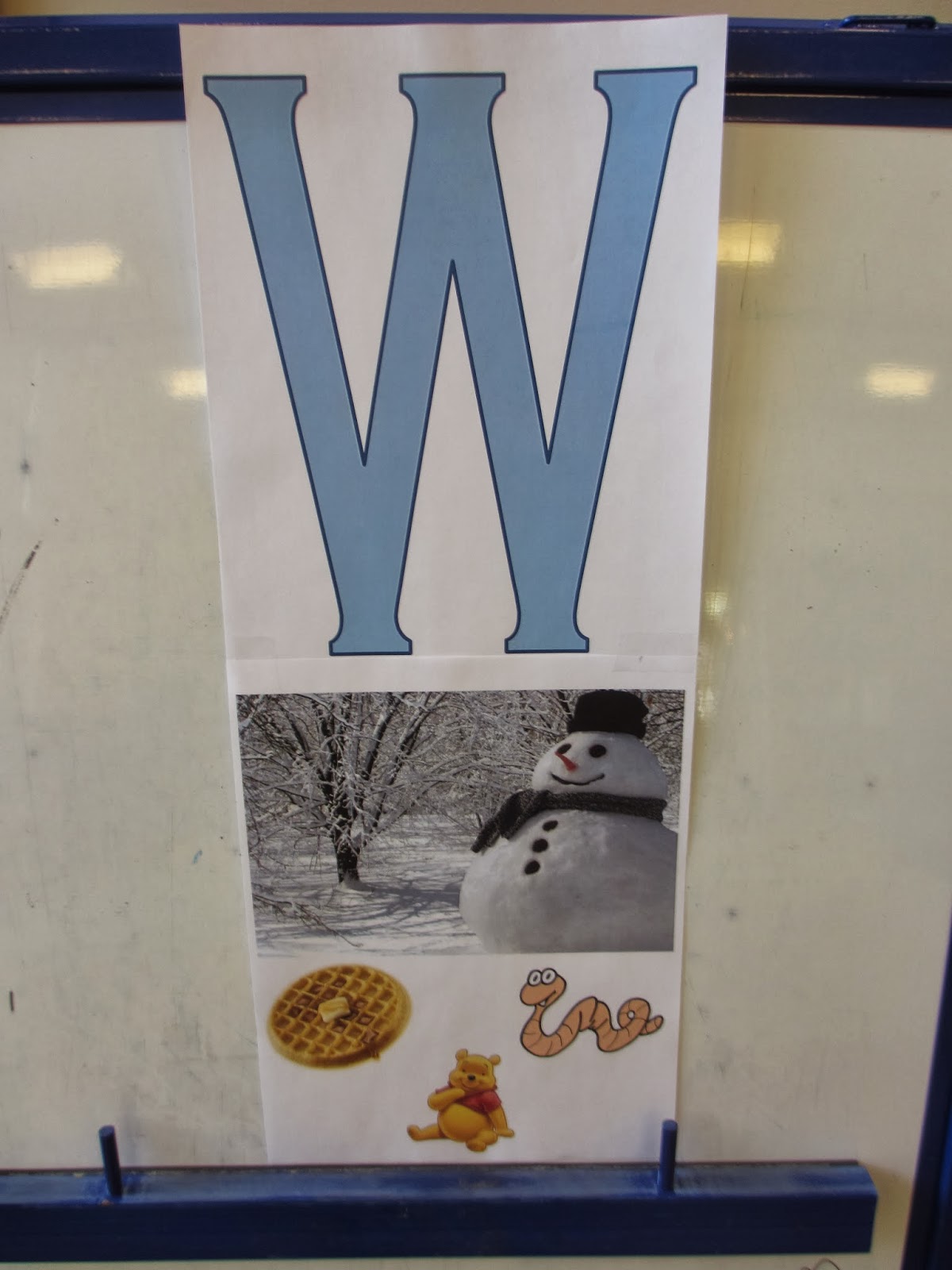 Our letter of the day was W.  I went with a more vague Winter theme so that I could throw in all kinds of winter themes, such as snowmen, warm clothing, snow, etc.  W was a little difficult for the kiddos, one of them guessed 'M' which was close.  So we talked about W and its sound along with the other pictures I had. 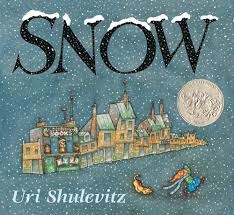 The first wintry book that we read was Snow by Uri Shulevitz.  In this story a boy and his dog get excited when they see one single snow flake.  Every one keeps telling him that the flake will melt, as will the next one, and the next one...  There is no snow in the forecast.  But, the snow does not know that, and it begins to fall faster and faster, blanketing the city with white.  This book has very simple text that is good for the little kids and it is fun to watch the snow 'accumulate' on the pages.

After reading Snow, we did Carole Peterson's song We're marching in the snow.  This is a fun and active song where the kids march, run, slide, roll, etc. in the snow. 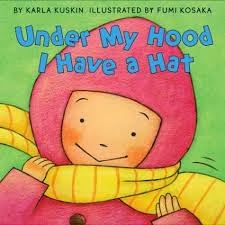 Our second book was Karla Kuskin's Under my hood I have a hat.  This is a great story for a winter or clothing theme.  The little girl in the book talks about all of the layers of clothing that she wears for a cold day in the snow.  We talked before the book about all of the items of clothing that the kids had put on that day to go out in the cold weather.  The book has simple, bold illustrations that are easy for the kids to see despite the fact that the book is a little smaller in size.  I especially love the end when the little girl talks about how when she goes out she mustn't fall down, as it is hard to move with all the layers she is wearing.

We followed Under my hood with another Carole Peterson song, Ring those bells.  Basically you do lots of bell ringing while Carole sings that Winter time is here.  Always good for mid-winter story times, though I have found it you try it before January the parents give you lots of eye rolls.

Since I wasn't planning a snowman theme this year I brought out my Melting Snowmen for our winter week. You can read more about them here.  They have a rhyme and each one melts away after each round of the rhyme.  This is always a hit with the kids.  Especially once they join in with the rhyme. 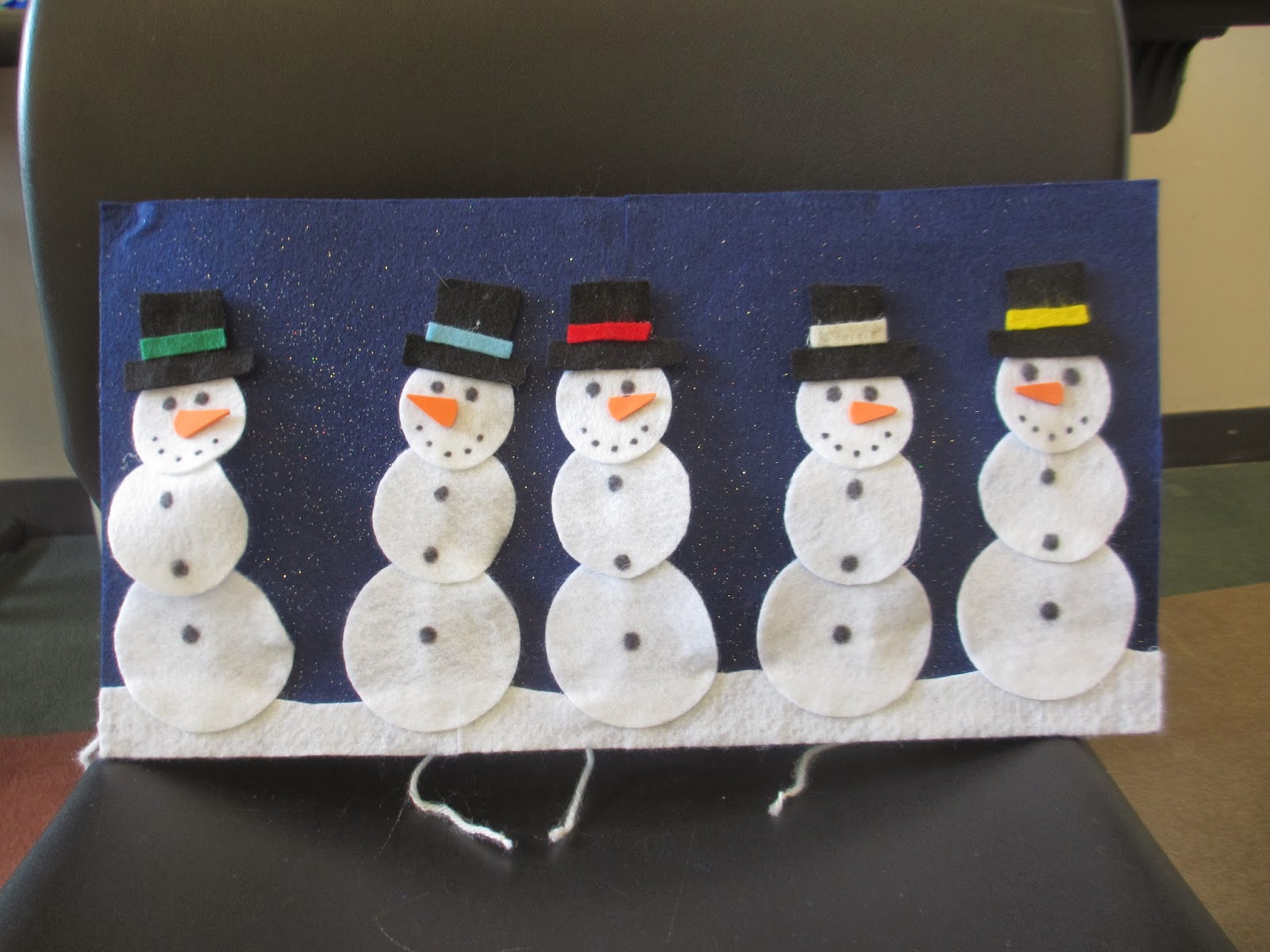 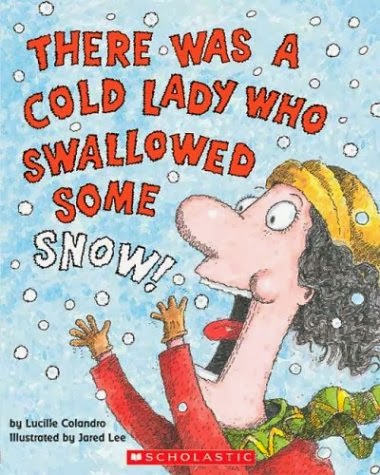 Our final story of the day was a version of There was a cold lady who swallowed some snow by Lucille Colandro.  I decided to make this more of a participation story, so I made pieces for all of the kids to feed the cold lady as we told the story.  In the book, the lady eats various items that make up a snowman and then hiccups out a completed snowman.


Here is the lady.  I made her from a shoe box.  To make her face I just used circles and crescents in a word file.  Then i taped the picture on the box and cut out her mouth with a knife and taped around the opening.  I taped white yarn to the top of the box for hair and stuck a hat on here (this is the spare I keep in the car for my son). 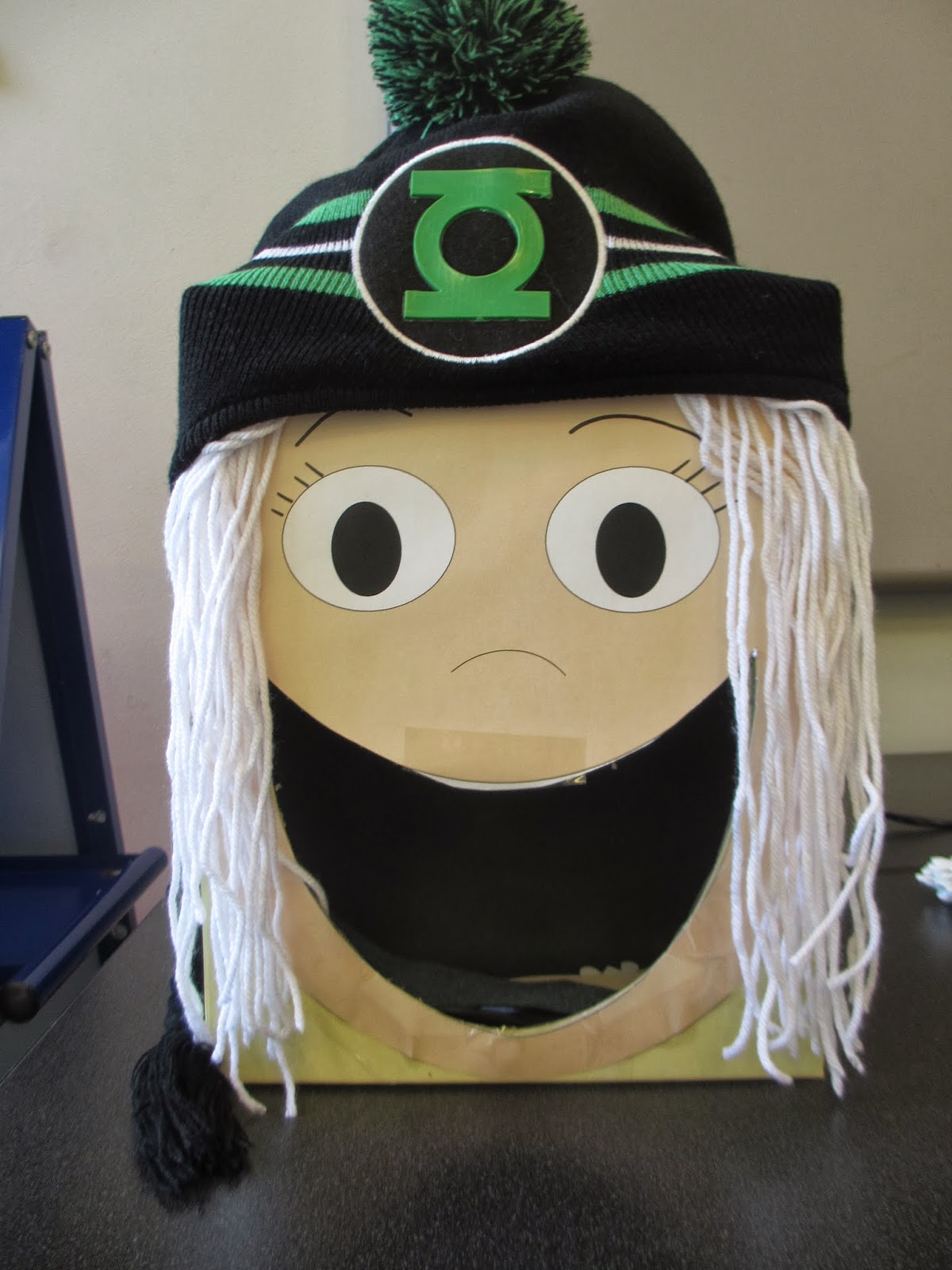 These are the pieces to give the kids.  I had extra coal and snowflakes to ensure that there were enough pieces to go around. 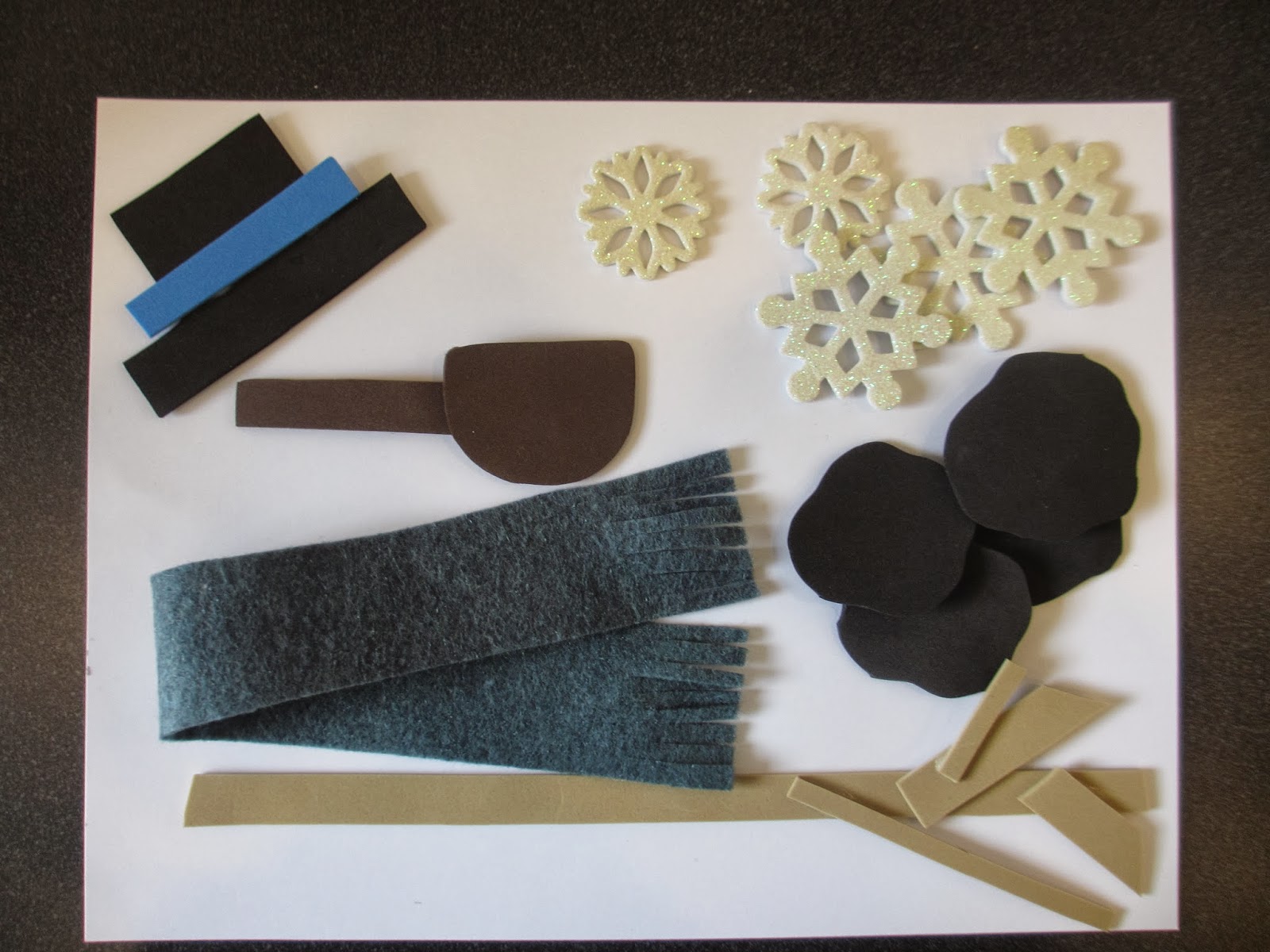 This is the back of the box.  I just taped on black construction paper so that from the front the mouth looks black but there is a gap to slide the snowman through at the end. 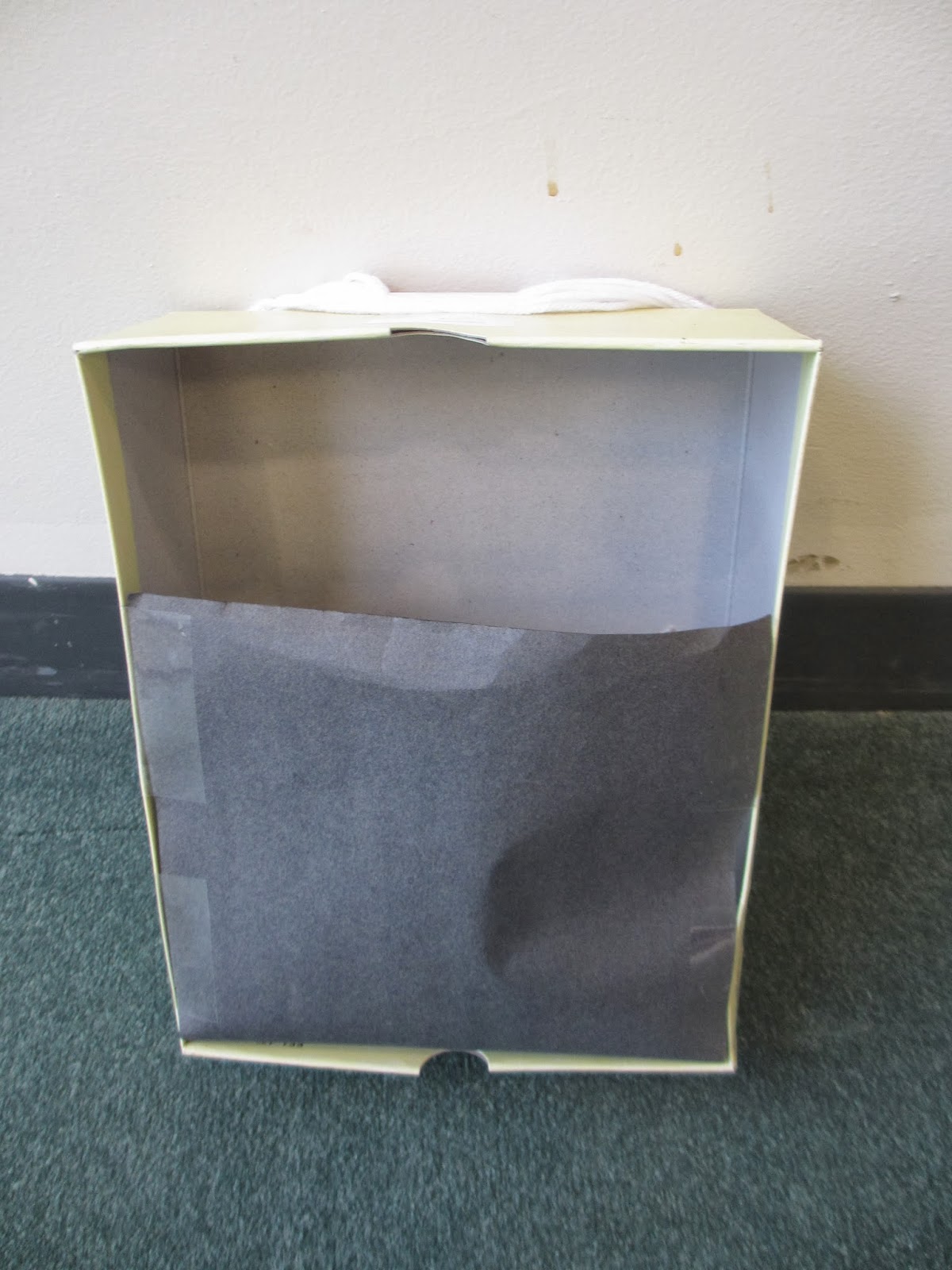 During the story the completed snowman is velcroed to the hat in the back.  As I read the book the kids brought their pieces up to feed the lady.  Many of them needed a little prompting, but they got them all in there. And at the end, out pops a snowman! 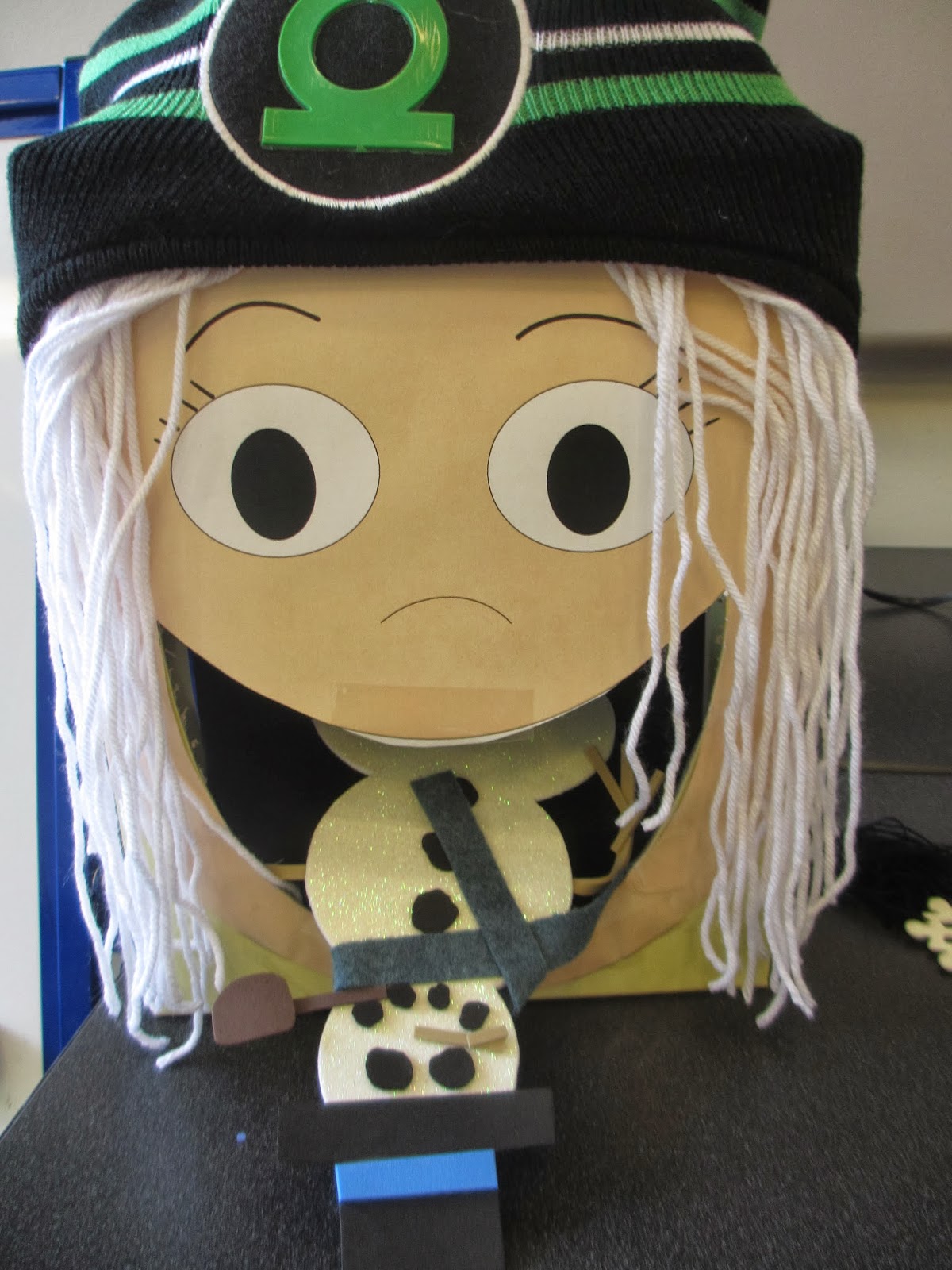 We finished story time with yet another Carole Peterson song (what can I say, her music is great for toddlers and preschoolers).  This one was called Snowflake snowflake and in the song there are snow flakes softly falling.  I don't know if the song was meant to be used with scarves, but I gave all of the kids tissues.  For starters, the kids just love getting to pull one from the box.  Secondly, during the song you try to hold the 'snowflake' in the air by blowing at it.  I figured that if the kids were to have any success with this at all we needed something very light, so the tissues did nicely.  Plus. we threw them away at the end so no worries about spit being blown on the scarves.  The kids did enjoy this one, they had a little difficulty getting those tissues to blow around, but they had fun trying.
Our craft for the day was a simple hat and mittens.  Each kid got a hat with two mittens cut out of construction paper.  They also had a piece of card stock with a circle on it to be their face.  They could decorate with foam snow stickers and makers. 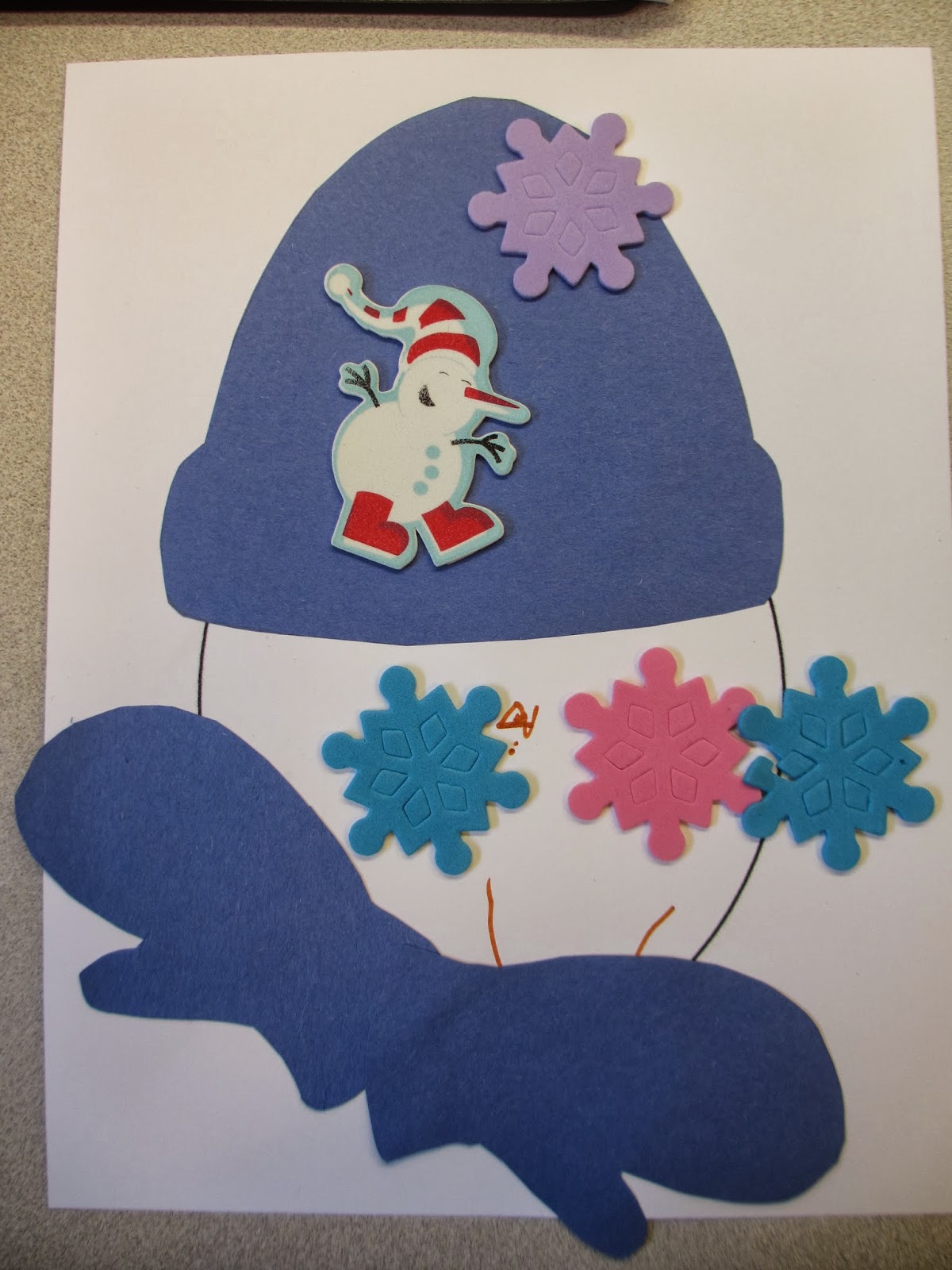 Monkeying Around in Story Time

This week we resumed our story times and were up to the usual monkey business - literally.  Our theme this week was Monkeys and we had quite a bit of fun with it.  So, as you can see below, our letter of the day was M.  This is what I put out for story time.  We start with it covered up with the words to our hello song and then I pull  that away to reveal our letter and the theme.  For this session I also started adding some other words that begin with the same letter. 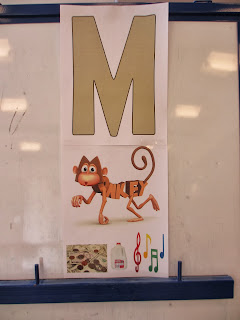 Instead of having Sparky my dragon reveal the letter today we had a guest monkey.  We talked about the words on the paper that start with the letter M and then talked a little bit about monkeys. 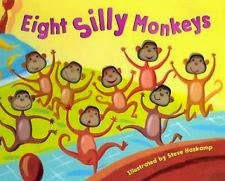 Our first book was Steve Haskamp's Eight silly monkeys.  In this version of monkeys jumping on the bed the monkeys the monkeys do a different action on  each page as you count down from eight to none.  So, you have monkeys that are spinning, dancing, sliding, and more.  The kids enjoy the repetition with this book and many of them were doing the 'mama called the doctor' part along with me.

After reading Eight silly monkeys we sang Five little monkeys by Eric Litwin and the Learning Groove.  This is a nice bouncy version of the rhyme and we jumped along with those five monkeys. 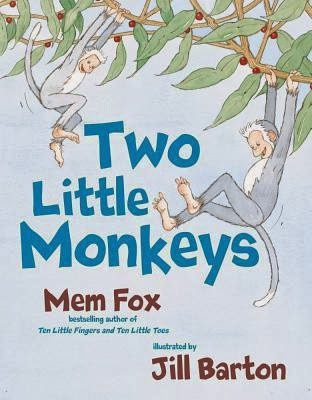 The second book that we read was Two little monkeys by Mem Fox.  This is the story of two monkeys, Cheeky and Chee.  When danger is nearby they have to scamper to safety.  This story has a nice rhythm and rhyme and the illustrations are great for sharing in story time.  The kids enjoyed trying to figure out what the monkeys were running from.  We were also able to discuss some new words as the monkeys 'scamper' and 'tremble' so hopefully a few kids went home with a bigger vocabulary.

We followed Two little monkeys with Hap Palmer's song Five little monkeys.  Another version of the song, but this one has the kids jumping, hopping, and turning.  It ends with all the monkeys jumping outside (because there is nothing wrong with jumping outside) and then they all fall down - a perfect landing for the start of the next story.

Our last story was a prop story.  The previous library I worked at had a stuffed palm tree with monkeys that could velcro to the leaves.  It was great for the rhyme Five little monkeys and the crocodile.  When I started planning a monkey story time I found myself missing it, so I had to make a replacement.  I decided to go big and make an almost life sized prop story. 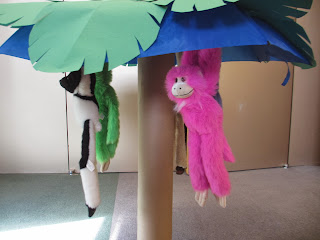 I took my umbrella and made some large paper leaves that I taped on with book tape.  I taped them both at the top and underneath the bottom, though the bottoms pulled off in a few places. 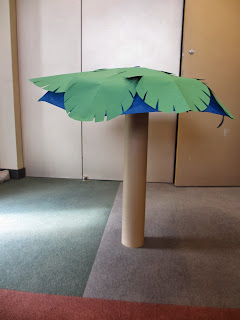 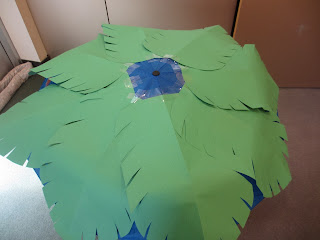 For the rhyme I had 5 monkeys with the hands that velcro together.  I pulled them out one by one at the kids counted as I velcroed the monkeys' hands around the metal bit on the underside of the umbrella.  I hind site I should have added some velcro to the underside of the umbrella and stuck the monkeys to that.  They went on fairly easy, but were a little hard when it came time to pull them off. 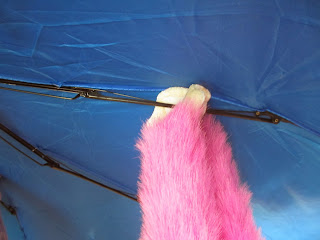 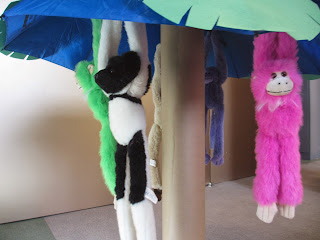 So, here we have all monkeys on the tree and we did the rhyme:
5 little monkeys swinging in a tree,
Teasing Mr. Crocodile 'you can't catch me.'
Along came Mr. Crocodile, quiet as can be,
And SNAPPED a monkey right out of the tree.

Repeat until all the monkeys are gone.  We did have an alligator puppet, but I thought that would be a bit 'graphic' for 2 and 3 year olds.  We 'snapped' with our hands instead. 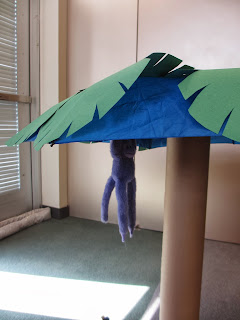 When I was doing the rhyme I just held the umbrella.  That worked fairly well, it was a little harder getting the monkeys on, but I was able to make them 'swing' in the tree.  The trunk in the picture is a roll of brown paper.  Next time, I might leave it on the trunk to put the monkeys on, then pull it off for the rhyme.

In addition to me doing the rhyme, the kids also had a version to use.  Someone who was here before me made a large number of these sheets: 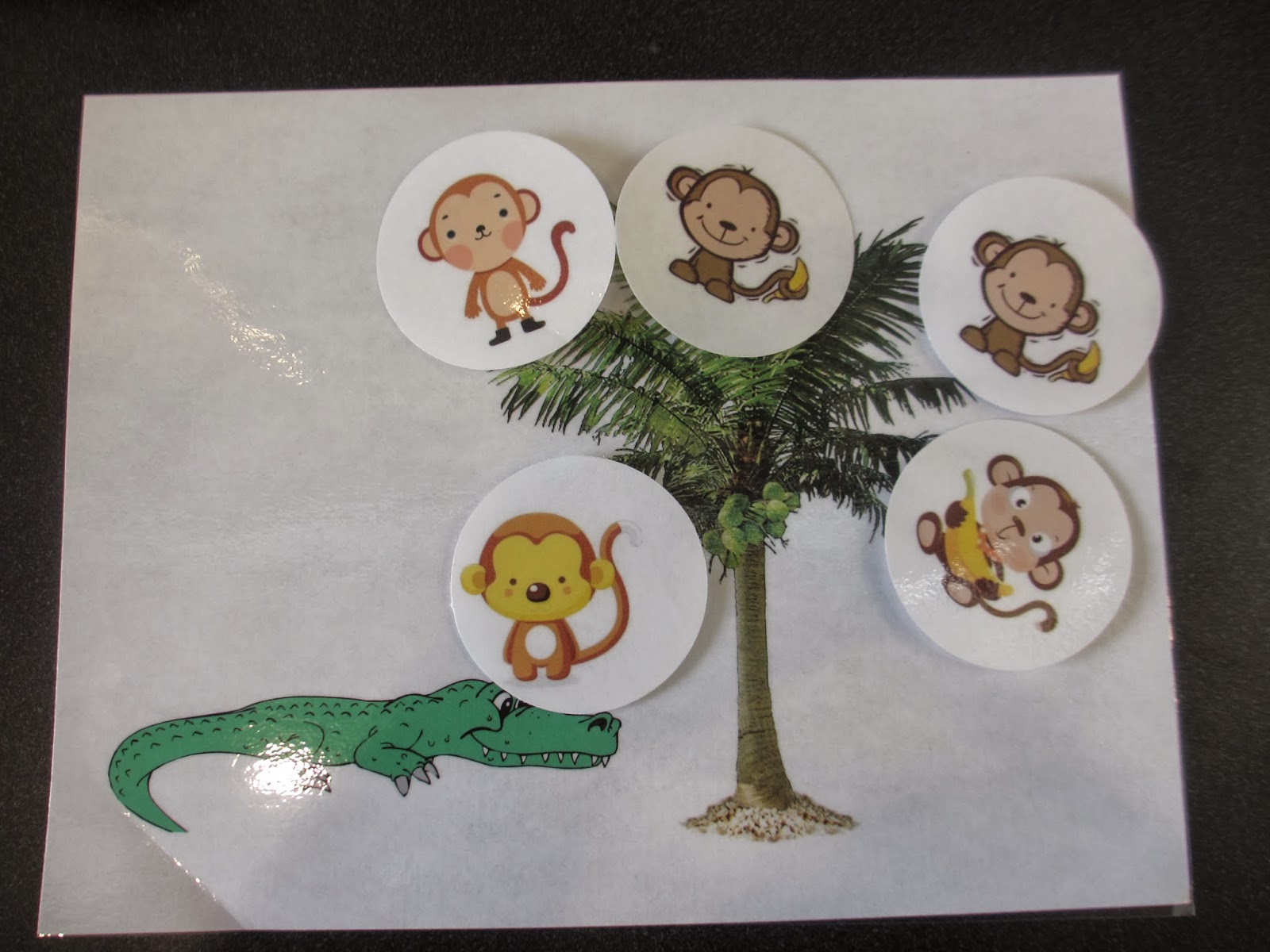 So, each child in story time had their own sheet and they could pull off the monkeys with me.  They seemed to enjoy this, though many of them got ahead of themselves and pulled all the monkeys off as fast as they could.  They adults with them were great about stepping in to help and we worked on counting our monkeys that were left each time one was removed. 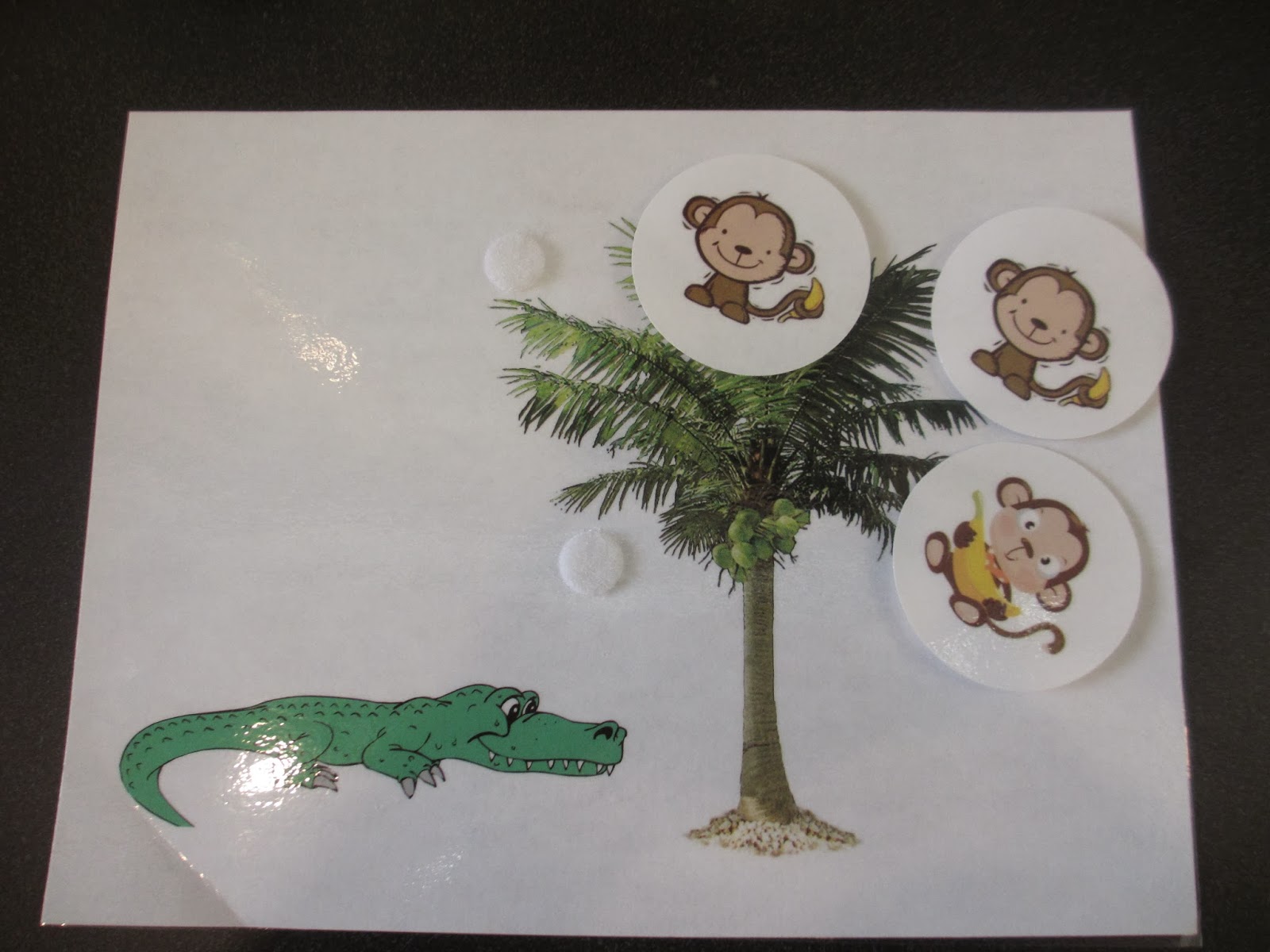 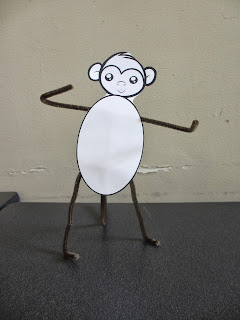 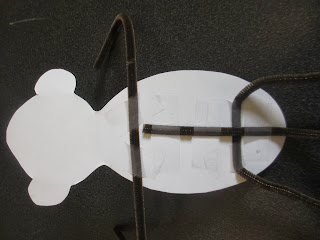 The second monkey craft was a smaller version of the above monkey.  Instead of pipe cleaner arms and legs they folded paper. 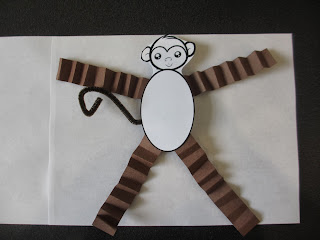 We used the smaller monkeys to decorate the bulletin boards in our story time room.  The kids really liked being able to pick out a spot for their monkey and tape it up there. 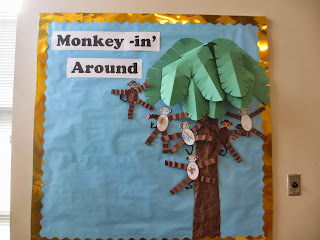 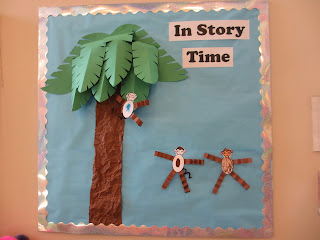