Based on the last two post I have been feeling rather silly lately.  We decided to offer a Holiday story time this year and I went with a Silly Santa theme.  Santa tends to be fairly safe in this area as a theme, he seems to be everywhere this time of year for breakfasts and photo ops.  he was even at our library last week for pictures during a holiday open house.  However, I did advertise that the theme was Silly Santa Stories so that people would know what they were in for.  I did the same theme at the local head start when I visited earlier this week and I asked before going to make sure that the theme would be ok. 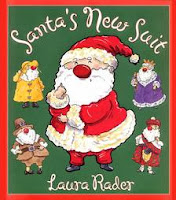 I started with the story Santa's new suit by Laura Rader.  In this story Santa discovers that all of his red suits are dirty, torn, or too small, so he goes shopping for a new suit.  But, while he is out he decides that he will go in a different direction and picks a suit that is not red.  This does not go over well as the elves and reindeer hate the new outfit and the kids don't recognize him.  What will Santa do?  This is cute as a book, but I have also seen it as a flannel board.  You can find one version here with the storytimelady. We also read the story Santa Duck by David Milgrim.  When Duck finds a package with a red Santa coat and hat he is thrilled.  He sets off to find Santa to give his wish list, but along the way is repeatedly stopped by the other animals who give their own lists to duck.  This is a cute book and the kids really liked the quacking holiday song that duck sings a few times. 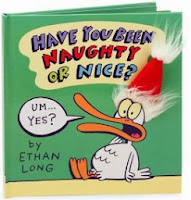 The next book didn't quite make it in time for my preschool visit, but I was happy it arrived for the in-house story times as it is a fun book.  Have you been naughty or nice by Ethan Long is about duck, who is fairly sure that he is on the nice list this year.  That is until he eats all of the cookies that were intended for Santa.  Then he is certain that he will be on the naughty list.  Does duck have time to get back on the nice list?  This fun story is great for very dramatic reading. 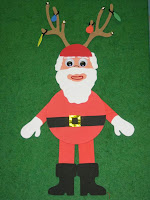 I decided to use the flannel story that I came up with last year.  Since I moved to a new library no one here has heard it :).  The story is called Away flew Santa's hat and the idea is that on a windy Christmas Eve Santa's hat keeps flying away.  Each time a hat goes someone lends him a new hat, although at one point he is in a bind and has to use underpants.  You can read the full story here.

I managed to find some songs that weren't too Christmas-y.  We danced along to Carole Peterson's Freeze.  The music is the song Let It Snow, but they do not sing the words.  The kids dance to the music and occasionally it will stop and they have to freeze.  Some kids like this as they get to dance however they want (they are very enthusiastic) others just sit there and stare at you.

Carole Peterson has another song Jingle bells and stop.  Similar to the freeze only with bells.  This song has the kids jingle their bells and stop periodically.  In this one the stopping is more predictable as there are words and you stop at the end of each verse.  During the song you jingle bells high, low, fast, and slow.

We also used Laurie Berkner's version of Jingle bells.  She adds a little extra verse of her own at the beginning, so we just jingled through it.  Then the kids got to sing along to the traditional verse which they all loved.

As an extra activity, we did Santa exercises.  We sang 'ho, ho, ho' to the tune of Jingle bells and stretched up, down, out, and in.  We started with our hands out in front like we had a really big belly.  This was a good movement activity to help get the wiggles out.
Posted by Sarah at 4:43 PM No comments:

Last month we started visiting a local Head Start program.  I went and did a story time for 2 of the classes there.  Generally I would use a theme that I was already doing for story times, but since story time is on a break I decided to use the theme 'Silly Babies.' 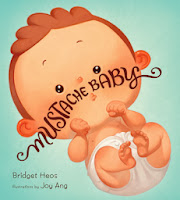 The first book that we read was Mustache baby by Bridget Heos.  This book has been a favorite at my house (so much so that we bought our own copy).  Even my husband likes it and he is NOT into picture (or any other books). This is the story of baby Billy who was born with a mustache.  His parents are told that they have to wait and see if it will be a 'good-guy' or 'bad-guy' mustache.  This is a very cute and funny story. 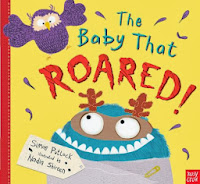 Our second book was Simon Puttock's The baby that roared.  In this story Mr. and Mrs. Deer are unable to have a baby of thier own, but as luck would have it they find one!  However, the poor little baby will not stop roaring.  The Deer send for help but oddly their friends keep disappearing when they are left alone with the baby.  This silly story has a bit of a surprise ending, adults will see it coming, but kids may not. 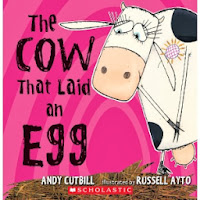 The third story that we read was The cow that laid an egg by Andy Cutbill.  Poor Marjorie the cow is sad that she cannot do any special tricks like the other cows.  But, when she lays an egg she gets all sorts of special attention.  The other cows are suspicious that the chickens have something to do with this odd event, but they all just have to wait for the egg to hatch to find out what the baby will be.

Since I do my 'on the road' story time much like my in-house story time I took along my ipod.  Sadly the dock quit working (despite the fact it had been fine a few days earlier).  But, as luck would have it, each of the classes that I visited had a dock, which was great as the alternative was using my phone and that speaker is not very loud, or having me sing sans music.  So, there was music and dancing...

We started with the song Shake a Friend's Hand by Carole Peterson.  This is a good group song as it has the kids shaking hands, bumping hips, and scratching the backs of their neighbor.

I had them counting with Mr. Eric and the Learning Groove's 1,2,3, Whee!  This song is very fun as the kids love to throw their hands up into the air and yell 'whee!'  They also get to jump and shake.

I took the library shaker eggs and we sang Shake your boom boom by Angela Russ.  While your 'boom boom' can be anything, we use the shakers and move the shaker a directed in the song, such as up and down, in and out, back and front.

We ended with the 'Banana Chant' or B-Bananas by Carole Peterson that I used all story time session. I enjoy this fun chant and the kids always seem to enjoy it.  It is nice that this version repeats so that the kids can do it once to get the hang of it and then they get to do it again.
Posted by Sarah at 4:06 PM No comments: