This week we had what I thought was a super fun story time.  I saw the book Dear Zoo on the NYPL list and knew that I wanted to use it in a story time - especially once I saw several flannelized versions of it!  So, our theme this week was Wild Animals.  I added the Wild so that the letter of the day could be W since we had already used an A this session with Apple week.  I am not opposed to repeating letters as they are random anyway, but if I can avoid it and feature a new letter I will do that. 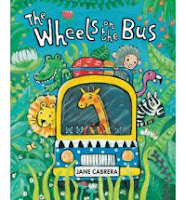 The first book that I read is a new one by Jane Cabrera (I always love her books), this is her version of The wheels on the bus.  But, this isn't just any bus.  This bus is filled with WILD zoo animals.  So, I had all the kids sing along with me as we flapped like flamingos, chattered like monkeys, roared like lions, and slept like bush babies (they are SO cute in the book).  The book might be just a tad long, but since all of the kids were singing and doing the actions none of them seemed to mind. 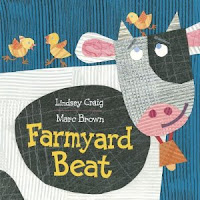 Our second book was Farmyard beat by Lindsay Craig.  I happened upon this book one day when looking for something else and knew right away I wanted to use it in a story time.  This book features farm animals (ok, they are domesticated, but they act wild and no one complained) who all 'caught that beat.'  There is a nice rhythm that goes along with this story so you have to rap it instead of read it.  (Well, you could read it, but what fun would that be?  And, I think it would be really hard to avoid falling into the rhythm, it's that catchy.)  The illustrations are really great with big cute animals. 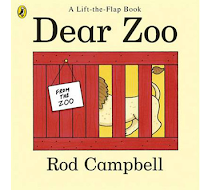 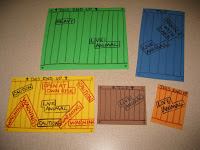 The final book of the day was our featured book Dear zoo by Rod Campbell.  I turned this one into a flannel story and the kids seemed to enjoy it.  I had a box for each animal and I put the box up with the animal behind it.  Then I would give hints like this box came with some bananas, or this box was making a hissing noise.  This worked a little better with the family story time where the kids are a little older, but the 2 and 3 year olds enjoyed it as well.

We had several animal songs to go with our books.  One was Sue Schnitzer's Jump, jump, jump where the kids jump like kangaroos, slither like snakes, wiggle like worms, and soar like a jet.

I had another flannel that we did with the song 1 elephant went out to play.  I was inspired by Miss Mary Liberry's Flannel Friday post for this song that goes:
1 elephant went out to play
On a spider's web one day.
They had such enormous fun,
That they called for another elephant to come.
'HEY ELEPHANT!!!!!!' (We really yell this part because yelling in story time is one of my favorite things to do!)

You repeat with 2, 3, 4, 5, and 6 elephants.  Then, once all six are up there I say 'what do you think happens when 6 elephants are on a spider's web?  It starts to wiggle, and wobble, and...' and I shake the web until all the elephants fall off. 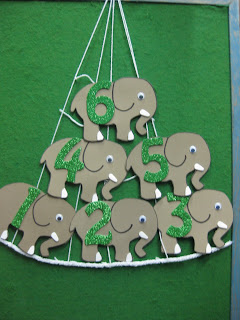 We also sang Laurie Berkner's I know a chicken.  This is always fun with shaker eggs.  Sometimes I do cut this one short because it is over 3 minutes long and 2 year olds can only do so much egg shaking before they get bored and start throwing their eggs :)

Our final song was All the fish by Sue Schnitzer which I find is always a crowd pleaser.  This song has fish, ducks, frogs, crocodiles, seagulls, and kids swimming and slashing in the water so there is a lot of action for the kids. 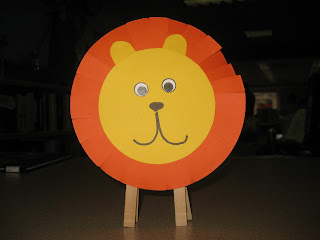 The craft this week was a fairly simple lion that I found here.  We changed it a little to make it simpler.  Thankfully, we have Ellison circle dye cuts, so the kids got one big orange and one smaller yellow.  They also got to try out scissors and cut a mane for the lion.  It was pretty simple, but they kids all liked roaring for their lion.
Posted by Sarah at 2:11 PM