This week we had our pre-Halloween story time.  Even though Halloween is next Monday, we did all of our dressing up this week.  I figured that by next week everyone would be tired of it.  I always go back and forth about if we should do a 'Halloween' theme.  I still have the kids dress up because it is fun and parents like to get more mileage out of the costumes.  In the past I have done a birthday theme, and pretend / dress up.  This year I went the Friendly Monster route.  Our letter of the day was M for Monsters and our feature book was Go Away Big Green Monster. 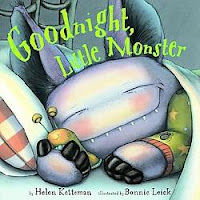 The first book that we read was Goodnight, little monster by Helen Ketteman.  This is a nice bedtime story about little monster getting ready for bed.  The text rhymes and the pictures are soft colors and not at all scary.  It is a little longer for the littler ones in my group, but I read it first and they did pretty well with it. 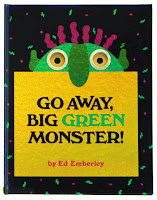 Our second book was Ed Emberley's Go away, big green monster, our feature book from the NPYL list.  This is another favorite and this kids tend to respond well to it.  I have them all shout 'Go Away' to the parts of the monster to get them to disappear. 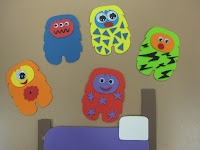 The last story was a flannel rhyme called Five crazy monsters.  I found the idea from Cate on her blog Storytiming.  Cate's monsters were so cute I couldn't resist making some similar ones.  In Cate's version the rhyme is Five creepy monsters, but I thought they were so cute I changed them to Crazy monsters!  The rhyme goes:
5 crazy monsters jumping on the bed,
One fell off and bumped his head,
mama called the doctor and the doctor said,
'No more monsters jumping on the bed!'

No more monsters jumping on the bed,
'let's go outside and howl,' they said!

-I really wanted to say 'Mama called Dr. Frankenstein and Frankenstein said...' but I figured that it is such a classic rhyme they would be chanting along with me (which they were) and I didn't want to confuse them too much.

Repeat with:
Jump up and down ... and all around
Give a growl ... and give a howl

We also had a few others songs.  Laurie Berkner's Monster Boogie is a great one for this theme.  It is also nice and short so I could do that with the If you're a monster and you know it song between books. 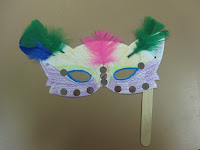 Laurie Berkner also sings We are the dinosaurs which we used this week.  Not monster related, but dressing up is pretend so we could pretend to be dinosaurs.  Plus, the song ends with a roar, which we had been doing a lot of this week.

We ended story time with the Monster Mash from Andrew Gold's Halloween Howls.  I gave all of the kids scarves to wave around as we danced to the music.  I think that the parents really liked this one.  Many of them were 'mashing' along with us.  I did cut the song a little short, but no one seemed to mind.

Our craft this week was a monster mask.  I found a dye cut for a cat mask and just let the kids add some feathers and shiny stickers.  I also put out some paint stampers and crayons to add to the fun. 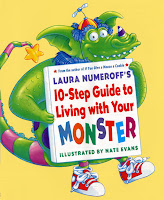 I did something a little different for Family Story time this week.  Usually I do the same plan that I have for the 2's and 3's because it tends to work out well that way.  However, I had advertised a Spooktacular Family Storytime, so I added the book Laura Numeroff's 10 step guide to living with your monster.  This is a fun book about how to select and care for a pet monster.  It has some humor, and great pictures of a silly monster pet and his antics.  We also added a few crafts to make the night more special.  They got to make a spider visor and a Frankenstein puppet in addition to the mask.  We ended up with 60 people, double my usual Tuesday crowd, and the only advertising I did was place a few signs around the Children's Room.  Makes me wonder what would happen if I advertise the theme each week...I think I will see how many return this coming week and then see if ads increase the size the next week!
Posted by Sarah at 1:37 PM