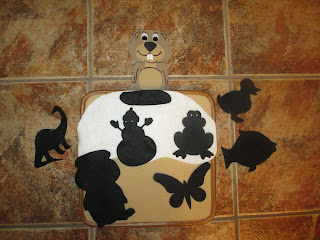 Since next week is Groundhog's day I am planning a Shadow themed story time.  If you are not familiar with Groundhog's Day it is celebrated every year on Feb. 2nd in the US and Canada.  Those of us living in a cold, dreary climate watch to see if a groundhog - most notably Punxsutawney Phil of Pennsylvania - pops out of his hole to see his shadow.  If he sees his shadow he will be spooked back into his hole for another six weeks of winter.  If he does not see a shadow he will emerge from hibernation and winter will end in four weeks.

Anyway, I added it to the story time roster this winter.  The problem is that there are very few groundhog books that are appropriate for 2 and 3 year olds, so I generally modify the theme to shadows and shapes.  As part of the program I get out the overhead projector and put various shapes up to make shadows on the wall.  I have the kids guess what it is (they are generally whatever dye cuts we have, a duck, frog, heart, square, etc.)  They love this.  Once I have put up all the shapes I let the kids get up and dance around to make their own shadows on the wall.  Fun, fun, fun!  And then our craft is shapes that they glue onto popsicle sticks so that they can go home and make their own shadow puppets.  So easy to do and they always love it!

So, moving onto the Flannel Friday part of this, I decided that since books were lacking I would write my own groundhog story.  This was an easy one to do.  I made a groundhog out of craft foam and glued him to a paint stick. 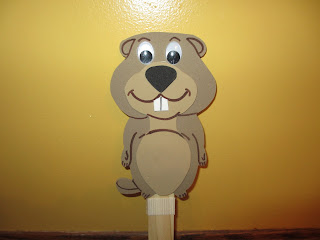 I affixed some velcro to the stick and the back of the flannel board so that I could make the groundhog pop up and stick there while I put up his shadow. 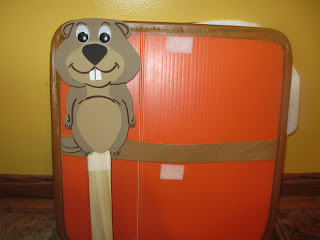 I gave him a nice snowy hole, and hid him behind.

You can begin the story by explaining Groundhog's Day to the kids, making sure to note that if he sees his shadow he pops back down into his hole.  Then, the story goes:

Groundhog's day had finally arrive and little Groundhog was ready to pop out of his hold for the very first time.  The trouble was that he was afraid to pop put of his hole because EVERYTHING scared him.  His mother had told him that if he popped up and saw the shape of a groundhog he had to come back in and hurry back to bed.  So, little groundhog mustered his courage and stuck his little head out of the hole... 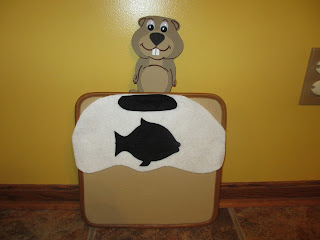 ...Oh no!  Is that a groundhog? (Pause for the kids to reply, you can play this part up if you want.  My 3 year old is always asking for monster stories, so I called everything a monsterous ___)  Scared little groundhog dropped back into the hole.  It didn't look like a groundhog, maybe he should check again... 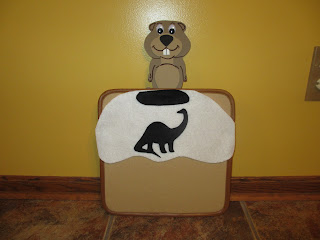 ...Oh no!  Is that a groundhog? (Pause again...)  Little groundhog dropped back into his hole again.  That hadn't looked like a groundhog either, perhaps he should check again... 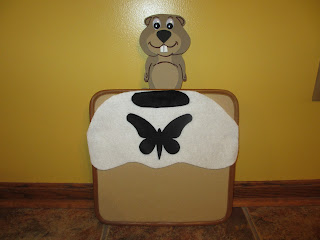 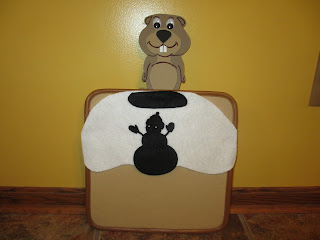 (I'm sure you get the picture here.  You can continue to have him pop up and down for as long as you want until...)


Little groundhog decided to try one last time.  He crouched down, got ready, and popped up as fast as he could and saw... 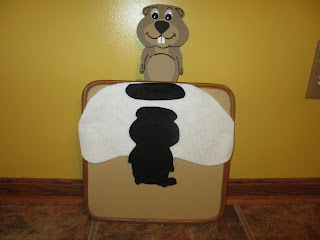 ...a MONSTER!!!  Little groundhog was so scared he flew back down the hole and went back to bed - for another six weeks :) 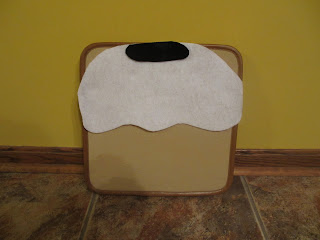 Like I said, fairly simple.  You can make him see any weird shadows that you want.  If you have a dye-cut machine it makes things really easy.  I know that some libraries have an educator's center with some and I have also heard some Board of Education buildings have them for use if you do not already have one.  Cutting basic shapes would work too.  We are going to do this story along with the book It looked like spilt milk by Charles G. Shaw and an illustrated version of Robert Louis Stevenson's poem My shadow.

So, here's to hoping the groundhog does not see his shadow!  If you are looking for this week's round-up as well as past round-ups you can find them with Anne at SoTomorrow.  You can also click on the Flannel Friday button at the right to see all Flannel Friday posts visually arranged on Pinterest.
Posted by Sarah at 11:37 PM