After last week's huge crowd our 54 on Thursday seemed small.  But, it was nice to have a little more elbow room at the craft table this week.  For the second week of story time our theme was Penguins featuring the letter P. 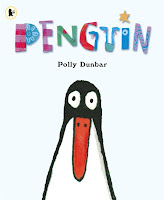 The first story that we read was Penguin by Polly Dunbar.  I really like this book, but I am sometimes worried about reading it as one one page a lion eats a boy.  Don't worry, the lion spits him out and the lion is rather friendly looking, you just never know how kids (or their parents) will react to that.  But, judging from the parental laughter it was not much of an issue - it is funny, the lion eats the little boy for being too noisy.  The little boy is noisy because his penguin will not say a word, even after being shot into space and offered to a passing lion.  This one was a crowd pleaser. 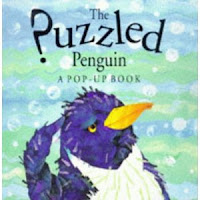 Our second story was Keith Faulkner's pop-up book The puzzled penguin.  This is a cute book with great animal pop-ups.  The little penguin isn't sure that he really is a penguin so he goes around asking the other arctic creatures if he is.  So, they point out all of the things that make him a penguin.  And, it is fun to read because this little penguin is cold, so he stutters some.  Plus there is a whale, walrus, and polar bear that you can do a nice booming voice for. 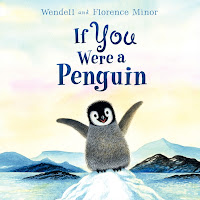 I read the book If you were a penguin by Wendell and Florence Minor instead of Penguin to my Monday group because of the boy-eating-lion scene.  I don't know if it was the first week and they were a little more wiggly or what, but this book kind of flopped.  It seems to be a great book for a toddler story time.  There are great, bold illustrations with only a sentence or two per page.  The book talks about all of the things a penguin can do and how they look and the various funny names that they have.  Whatever it was, the book fell flat, so for the rest of the week we read Penguin. 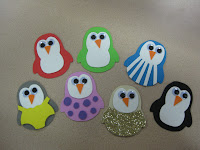 My flannel story this week was a version of Pippa's Penguins.  I first saw the story on the Rovingfiddlehead Kidlit blog, but it was originally written by Susan M. Daily and can be found on her website along with templates for the penguins.  I changed my story a little from Susan's story to better fit my style of story telling.  I started be asking who has seen the penguins at the zoo (our local zoo has a great penguin exhibit right at the front, so most kids have seen them).  For those who had not seen them at the zoo, we had penguins on our name tags so all of the kids could tell me what colors the penguins are.  So then I told them that our story was about a little girl who went to the zoo and love the penguins so much she asked grandma to draw her a picture of them when they got home.  First, grandma got the colors wrong... 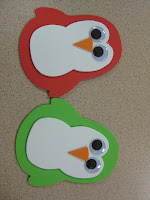 Then she gave the penguins some odd patterns... 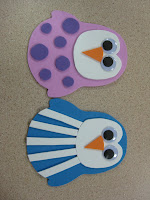 So, the little girl told grandma that a penguin looks like he is wearing a suit... 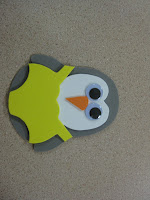 No grandma!  Not a bathing suit, a fancy suit... 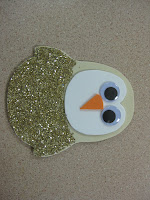 Well, maybe not that fancy.  At this point I had the kids describe the penguins again for grandma, who finally got the picture right. 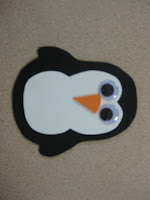 We actually had a decent selection of penguin songs this week.  Carole Peterson has the Penguin song that is a good, cumulative movement song.  You start by moving one arm and end up moving tow arms, two legs, and nodding your head.  A few of the combinations were hard for some of the 2 year olds, but many of the kids did a good job of keeping up.

Linda Arnold had a song call It's a penguin party that has really fun music.  I passed out scarves to wave along with the Caribbean-esque music.  The kids also waddle, swim, and dabble (we stepped from side to side).  I did stop this one a little before the end, but it was fun.  And she sings in English and Spanish throughout the song.

We also sang If I was a bird from the album Wiggleworms love you.  There aren't any penguins in this one, but we got to fly like a bird, swing our elephant trunks, hop like a kangaroo, slither like a snake, and run (in place) like a cheetah.

In addition we sang If you're a penguin and you know it.  Just like If you are happy and you know it but change 'happy' to 'a penguin' and then flap your wings, stomp your feet, and waddle around. 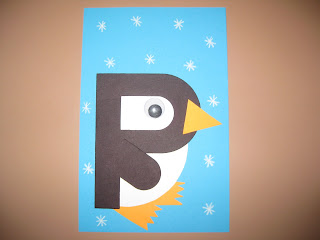 Finally, for our craft we made a penguin out of the letter P.  I saw something similar on Pinterest, you can see it here.  I modified mine some so that I could use our dye cuts more.  I discovered that the inside part of the P that gets punched out made a great little wing!
Posted by Sarah at 12:27 PM