While it is probably late for Valentine's flannel stories, I just had to re-share this one.  For the Valentine edition of Flannel Friday Miss Cate at Storytiming shared her flannel version of Matt Novak's My froggy valentine.  I ran across it last week when looking for something to use for my Valentine theme this week and it was too cute to pass up.  Also, if you happen to need a Valentine flannel for next week and have a frog dye-cut you could probably whip up your own version fairly quickly. 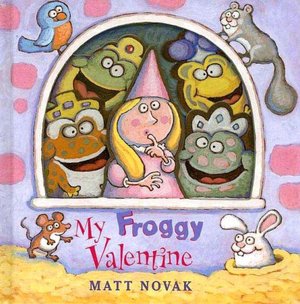 This story is a cute take on the story of the Princess and the Frog.  We did not actually have the book at my library (nor did any libraries I had access to though ILL) so I had to modify some and based my re-telling on Cate's post and reviews that I could find for the book.  All of the flannel pieces have 2 sides, so when you say 'Poof' (or whatever you want to use) you flip them over (which is why this one is actually made of flannel).  Also, Polly has some kissing lips that you put on each frog as she kisses him.  As I told it: 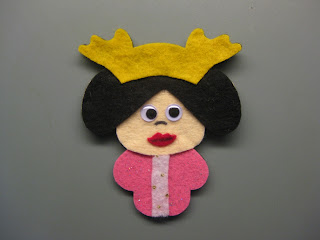 Princess Polly was lonely and she decided that she really wanted to meet a prince.  The problem was that she spent most of her time down at the pond, so all she met were frogs. 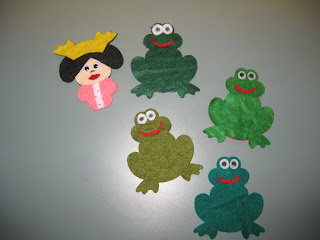 One day she was telling the frogs about how lonely she was and how much she wanted to meet a prince.  The frogs informed her that they were, in fact, princes under spells that could be broken if she kissed them.  Being that Polly knew her fairytales, she decided to give it a try, so she puckered up and gave the first frog a BIG kiss.  (Here I had all of the kids make kissing sounds).  And, poof!  The frog turned into... 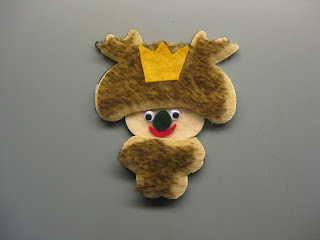 ... a hairy beast!  'You are not a prince,' cried Polly, 'you are a hairy beast!'
'True,' replied the Hairy Beast, 'but I am Prince of all hairy beasts!'
But, Polly was not looking for the Prince of Hairy Beasts so she decided to give the second frog a kiss.  (Kissing noises from the kids again).  And, poof! 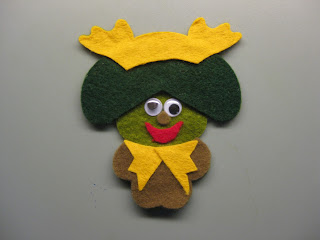 ... an ogre!  'You are an ogre, not a prince' said Polly.
'No, I am the prince of ogres,' replied the Ogre.
But, Polly was not looking for an Ogre prince, so she went ahead and kissed the third frog.  (Kissing sounds).  And, poof! 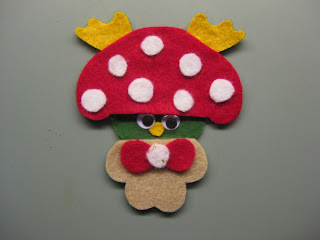 ... a toad stool!  (From what I could find the book has a goblin here, but I already had decided that I wanted a toadstool.  Not sure why, maybe to much Mario Bros as a kid?  Either way he is my favorite and got lots of  'awwwws' from the parents.)  'Let me guess,' said Polly, 'you are prince of the toadstools?'
'Yep,' said the Toadstool, 'marry me?'
'No thanks,' said Polly.
She turned to the last frog.  At this point she was really sick of kissing frogs, but there was only one left so why not try.  She puckered up... (kissing sounds) and, poof! 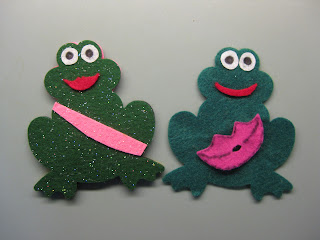 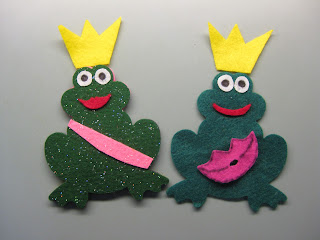 Princess Polly turned into a frog!  'You are in luck,' the last frog told her, 'for I am Prince of the Frogs and you can be my princess!'
And the two frogs hooped happily away together!

You can find this week's round-up all the way across the pond (if you are in the States like I am) with Library Quine at Loons and Quines @ Librarytime, a history of round-ups with Anne at Sotomorrow or you can have a visual feast of flannel at Pinterest by clicking on the Flannel Friday button to your right.
Posted by Sarah at 4:47 PM